Most of India is a little spoilt when it comes to history. After all, we have so much of it, we can afford to be slightly blase about it. History is the building that crumbles while a goat herder walks his flock through an ancient building where a nobleman rests. History is an inconvenience for when you need to jam the five cars your three member family needs into a small space and you can't drive up the stone stairs, worn smooth by years of ancient passage. The only history we seem to respect is the one where gods lived, and for the most part, only Hindu gods. 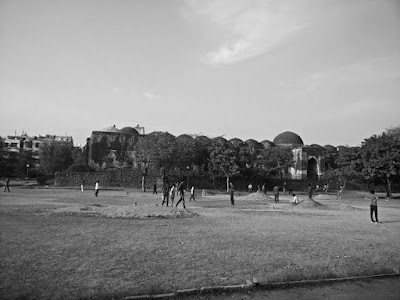 I'm speaking from real life here, because in the park bordering the colony I live in is an ancient mosque, dating back from the fourteenth century, which is used alternatively as a place to drink, a place to go to the bathroom and a place where the walls—in pretty good shape for one so old, are collapsing in on themselves, their foundation worn by the village next door, crowding in closer and closer. 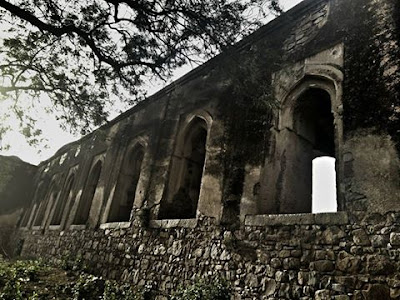 The Begumpur Masjid is not one I knew about before I moved into this new place. I knew it vaguely existed, but like many other people living in this continuously occupied city, I was more aware of the “big ones”-- the Qutub Minar, Humayun's Tomb, Lodhi Gardens. Places taken over and turned into tourist attractions with huge lawns and a ticket counter and guides to take you round and explain things to you. (Well, except Lodhi Gardens, but that is, I think, Delhi's biggest park and also adjoins some of Delhi's richest neighbourhoods, and so it's kept clean and green and beautiful.) One of the things I love about Delhi is how you can constantly be surprised by history—it's there on a street corner, or looming up right after the next traffic light, and the Begumpur Masjid is an example of that, sitting as it does at the end of a nice park. I went for a walk there as soon as I was settled in, but the more I walked around, the sadder I got. 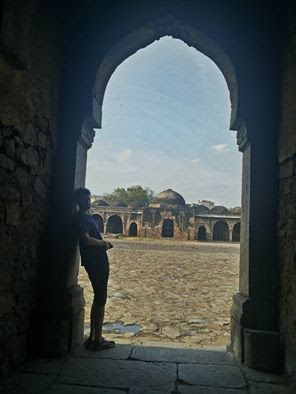 The previous year, I had gone to Greece for the first time, and seeing the reverence with which they treat every single ancient stone—and how they've turned it into a money making industry—made me wonder why we don't do the same in India. There's so much scope for it, and so many places; therefore, it's probably because the people are resistant. There's only so much space to go around, and if some of your space is taken up by a massive ancient monument, serving no purpose as far as you can see, the best thing in your mind, is that it crumbles down so you can build on top of it. 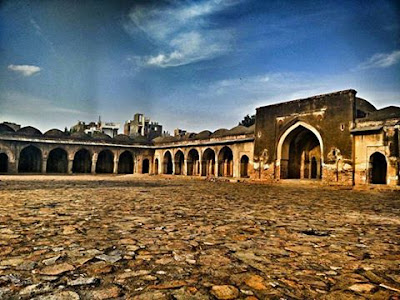 A few years ago, there was a brief revival of interest in a small palace in Nizamuddin called Lal Mahal. It dated back from 1245 AD and traveller Ibn Battuta once lived there, but since no one seemed to care about it, the person whose land it adjoined had it razed down to build over it. By the time the Archaelogical Survey of India found out and filed an FIR, it was too late. By contrast, the Begumpur Masjid isn't on anyone's private land, but there is no guard, no restriction on entry (hence the use of one of the old prayer halls as a toilet) and completely flaunting the ASI regulations, houses in the neighbouring village are less than 50 meters away from it instead of the legal 200. Until the early 1900s, a whole village was living inside it, until they were chased away. But now it seems like that encroaching is beginning again—smashed beer bottles in centuries-old domes, old staircases that could have been preserved if the right care was taken, all in threat of falling into ruin, unless something is done. 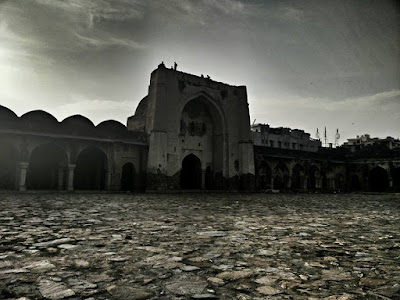 We all have that little bit of history next door to us. Maybe it's an old building or a garden or even what used to be a palace. And if no one cares, we need to step up and adopt these for our own. We need to visit more often, because if more people visit, the less free others will be to use them as drug dens or bathrooms. We need to write to our local concerned authorities and tell them of our interest. And most of all, we need to save history so it lives on, not crumpled under the weight of 21st century India. 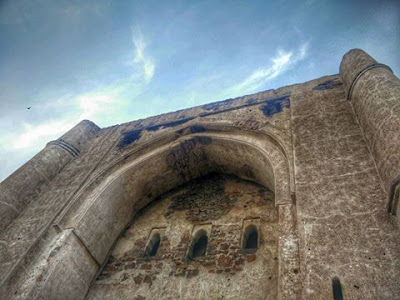 (Following this column which I wrote for mydigitalFC, I also wrote emails to INTACH and the Director of the ASI. I haven't yet heard back from them.)

(You can help by emailing them OR visiting one of Delhi's abandoned and unloved old monuments. It doesn't have to be the Begumpur Masjid--although, I think it's one of the nicest ones--but the more people who visit who don't want to do smack in a corner or poop in another one, the more wary encroachers will have to be. See how nice Lodhi Gardens is?) 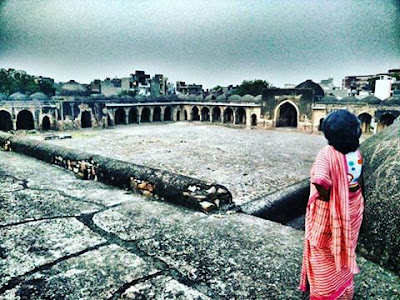 Email ThisBlogThis!Share to TwitterShare to FacebookShare to Pinterest
Filed under Column, Urban jungle