Next week, my ride on this big ol' planet will have circled the sun thirty six times. THIRTY SIX! Can you imagine? I'm just about wrapping my head around the 90s not being day before yesterday, let alone acknowledge the fact that people born in 2001 can have actual opinions. No, you may not. You are an embryo.

I fear I'm turning into one of those older people I always hated, slightly patronising, slightly looking-down-upon-you-all from her great age and experience, and yet, I resent these same qualities in someone who is 40 or 50.

When I was very young, one of the big things we did for my birthday every year was to get a "shape" cake from the Nirula's bakery in Connaught Place. Every year, about a week or two before, my mother and I would trot down to the bakery, and every year, we'd explain in great detail how we'd like the cake to look. One year, we had a merry-go-round where the horses were 3D and edible, a crowning glory was the Hansel and Gretel cake, the witch looked truly terrifying, and in a great show of bravery and birthday confidence, I grabbed her and bit off her head, saving the day. Sadly, I can't find photos of those cakes, so here, have one from my first birthday when Appu the elephant mascot of the Asian Games of 1982 was all the rage, and so he lived on my cake. 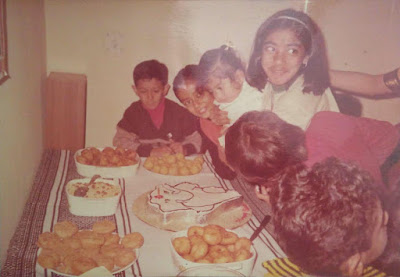 I am the child in the white, my gaze refusing to be torn from my cake, no matter how often whoever was holding me tried to make me look at the camera. I would not look. The Cake was the Goal. Also on the menu, from what I can make out: vadas, puris, some kind of pulao? and I don't know what those round things are to the right of the cake.

Here is also a photo from a fourth or fifth birthday, which I have included because this was also my expression this morning. 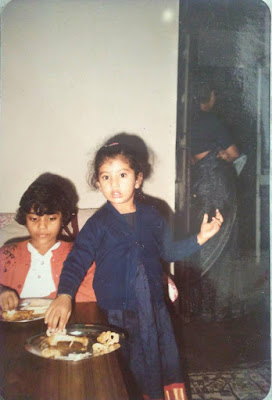 I call it my "leave me alone, I'm eating" face. I think my grandmother was visiting, which is probably why I was dressed so fancy. In fact, I think I remember this little lehenga, she brought it for me with a matching one for my Cabbage Patch doll. I loved that doll, she was brown skinned and had a dimple and an adoption certificate (I think her name was Joanne?) but I don't think I ever made up stories with her as much as I did with my other toys. Joanne was great, but she didn't leave very much to the imagination, she already had a name and a back story, unlike my beaten up teddy bear: Red Rose (and his little brother, Yellow Rose.)

Red Rose was also a birthday present, from this same Appu birthday as pictured above. The girl next to me seems like she was very clingy, she's in all the photos. She's probably married with kids now, and we wouldn't recognise each other if we passed on the street. "Gosh," my own baby face is saying, "Why can't this chick leave me alone so I can go back to playing with my NEW TOYS." The perils of popularity. (ETA: My mother tells me actually this girl and I shared a mutual love for each other and any time she wanted to find me, she'd go to this girl's house and ask, because I was usually there, but I think the photo speaks for itself. There's a time and place for everything!) 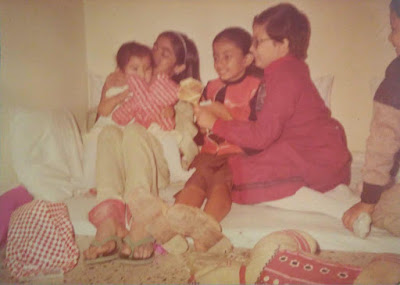 Anyway! Nirula's. So, the last time I ordered a shape cake from them was an Asterix and Obelix one, where I had to take my comic book there to show them what I wanted and explain how the writing had to be on the menhir and that, I think was age 10 or something. A few years later, I return for something or the other, and there in their "what cakes we can do" catalogue book were ALL MY CAKES. PLAGIARISED. Not a word of credit. I felt very betrayed, especially since random Nehas and Karans had their names all over my birthday cakes.

I'm thinking specially about the 80s, because this year I'm having an 80s-theme birthday party. Tonight, in fact. Just as a way to embrace our ages, and how far I've come since clutching Red Rose at a birthday party and trying to get a random girl to stop kissing me. (Wellllllll....) We're dressing as--actually, I don't want to ruin the surprise, but there will be photos on Instagram if you'd like to FOMO along with us. (To my friends who read this: please don't expect something fancy. We have cobbled together outfits from bits and pieces lying around at home. The costumes will definitely have a, um, homemade vibe.) (It was a great party, please scroll down to find a photo of me and K as Mario and Princess Peach respectively.)

In more recent birthdays, here's what I was doing last year.

And I will see you on the other side of birthday week! It's Wednesday, December 13, should you want to, oh, say happy birthday then. I'm STILL excited. Can you believe it? Maybe you only outgrow birthdays when you have a kid, in which case I'm safe.

On that note, let's move on to the Saturday Link List!

A quick Google search throws up multiple news reports about massive drug busts involving residents of Tilak Nagar (which also boasts over a dozen rehab clinics). It seems the neighbourhood – along with more infamous Delhi areas like Khirki Junction, Paharganj and Seemapuri – has become one of the hubs of a major trans-national drug transit route that connects poppy fields in Afghanistan and Myanmar with drug markets in Sri Lanka, Africa and Europe. Few escape untouched. Prabh tells me about Abu, a childhood friend whose addiction pushed him into a life of crime, and who spent years in Tihar Jail for murder before succumbing to an overdose. “I tried to get him a job at the place I was working at, thinking that then he wouldn’t have the time or energy to go out and do drugs,” he remembers, chuckling. “Five minutes into the interview, he’d grabbed the guy by his collar. He didn’t get the job and I got fired too.”


The crazy back story of Prabh Deep, the "next big thing" on the Indian rap scene.

In June 1873, a year before the Ingallses arrived, a mystifying cloud had darkened the clear sky of southwest Minnesota on “one of the finest days of the year.” Like a demonic visitation, it was flickering red, with silver edges, and appeared to be alive, arriving “at racehorse speed.” Settlers were terrified to realize that it was composed of locusts, swarming grasshoppers that settled a foot thick over farms, breaking trees and shrubs under their weight. They sounded, according to one unnerved observer, like “thousands of scissors cutting and snipping.” A young Minnesota boy was in school with his brother when they heard the locusts coming, around two o’clock in the afternoon. As they started for home, cringing under a hail of falling insects, the boys had to “hold our hands over our faces to keep them from hitting us in our eyes.”

I don't know how many of you have read the Little House series by Laura Ingalls Wilder (DO IT), but the locust scene from On The Banks Of Plum Creek was one of the scariest things ever. Here's how it affected America.


Seemingly overnight, we're now at #1,456. The Shed at Dulwich has suddenly become appealing. How? I realise what it is: the appointments, lack of address and general exclusivity of this place is so alluring that people can’t see sense. They’re looking at photos of the sole of my foot, drooling. Over the coming months, The Shed's phone rings incessantly.


This guy turned his GARDEN SHED into the top rated Tripadvisor restaurant in London and this story is HILARIOUS. (I also suggest clicking on his name and checking out his other hi-jinks)


Comparing Lily’s life and Merope’s existence is like comparing that of a princess and a peasant. Pretty, popular, smart, and kind, Lily was near universally loved in life and practically deified in death. Even the few who dared to dislike or mistreat her (Voldemort, Death Eaters, and blood purists aside) only did so because of their negative reactions to her perfection: Petunia cut contact with her out of jealousy, and Snape called her a slur partly out of frustration for his unrequited feelings for her—feelings that became his single motivation in life even after she married one of his tormentors. Even in death Lily surpasses Merope; the former was honoured with a memorial statue dedicated to her and her family while the latter probably was buried in an unmarked, unmourned grave.


Analysing the tragedy of Voldemort's parents.

We’d been getting along okay, these two cats and me, since the deaths of their two other housemates, last winter. The pair of them are very different, one businesslike and aloof, the other a laid back counterculture icon in cat form, but they exist in a state of pleasantly reserved friendship, with little aggro or drama. They seem to agree on all the main political topics of the day and favour sitting no more or less than fourteen inches apart, silently chewing over whatever in their minds happens to be most pressing at that particular moment. With these two by my side, I have not felt any desire to go out and get another cat to replace those I lost in quick succession a few months ago. Besides, Ralph - the horizontal and chilled of the remaining two - offers a love roughly commensurate to that of three or four normal cats. There is the sense that, were I to totally abandon my daily domestic duties - gardening, housework, laptop, cooking, bladder relief - he would remain permanently glued to my chest, determinedly attempting to make dough from my skin while looking deep into my eyes with the fervour of a deranged superfan.

I love cat writing, especially when it's good cat writing, but this is sort of a ghost story, a rescue story and a mystery set in the deep English countryside which is level up.


It started in the pilot, when Leonard and Sheldon invite Penny over for their very first bonding session. Despite opening their fresh Chinese food containers on camera, all of these containers are nearly empty, and the characters immediately partake in an eating technique that has since defined the series: The “mix around air in the hopes it looks like food” move.


Lighten up with a set of gifs that shows how terribly the cast of The Big Bang Theory "fake eat."

Email ThisBlogThis!Share to TwitterShare to FacebookShare to Pinterest
Filed under Being me, Newsletter, Nostalgia