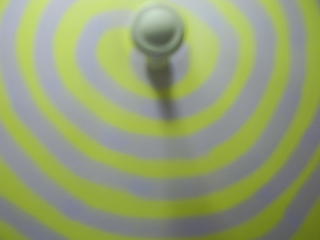 Clearly some people have no patience. And no, it's not the threat that got me to get out of bed to the computer, just that I was feeling a little better, having just had one of those steam baths that leave your fingertips and your toes all puckered and your bathroom mirror all fogged up and your skin almost, but not quite blistering, just exquisitely red. So my sinuses have cleared up a little, the fever has practically gone, and yeah, I do feel a little less sorry for myself.

My room is also looking a little nicer--it's been looking like I feel these days--you know, stuffy, because I couldn't stand the fan on more than one or two speed, and when you sleep from when it's daylight to nighttime and you wake up and put on the tubelight and your mouth tastes all metallic and you feel even worse than before.

So yeah, no really, really exciting stuff. Just that I've been reading a lot in my awake time, I just finished The Kite Runner yesterday, it didn't take me very long, quite nice too. And some old Mad magazines which I love. The new ones, the ones they make here now in India aren't nearly as good as the old ones are they? The new ones have Spy vs Spy in colour for fucks sake. And the jokes are terrible and the satires are barely funny. And they don't do 'The Lighter Side Of...' anymore, ever since that chappie who used to draw them died, Dave something. It's like the new Asterix comics All At Sea and all, which just didn't have the same humour they did when the other guy was alive (WHY can't I remember any names? I'm too young to be losing my memory!) And I re-read some Calvin And Hobbes--the indispensible I think--and fondly recalled my own imaginary friends.

Yes, I had imaginary friends. I was a lonely sorta kid, little wierd too, who preferred to read or talk to flowers or create zoos with caterpillars than play House-House or stapoo (hopscotch) or Mother May I. Once this other kid was giving me a hard time and instead of retaliating, what did I do? I made a voodoo doll of her and snipped off her legs and her arms. Gave me great pleasure too. Nothing ever happened to her though. Anyway, so my imaginary friends were called Sarah and Gaurav (and these are real names, not psuedonyms) and they could fly and they thought I was supercool. And then I forgot what happened to them. Oh wait, yeah, I made some "real" friends and learned to conform a little and play with Barbies and Sarah and Gaurav perished. I suppose if like Calvin was real and all, Hobbes probably has what? a year or two at most of existence. That's rather sad.

There have been people in my house too--many relatives, but because I'm sick and confine myself to my room, I don't see much of them. I have promised to take The Cousin out clubbing, since she wants to see some of Delhi's nightlife and flesh-and-blood get my upgraded Clubs-Of-Delhi tour, starting with, yes, TC tomorrow. :) If I'm not dead by then.

Okay, I'm going back to sleep. The picture is of my ceiling by the way, the view I have had for the past two days. Over here is another picture, but of me, not of my ceiling. At least me-in-the-eyes-of-other-people. Though my mom did look at it and go, "That's pretty good!" Hmph. :)
Posted by eM at 9:33 am

Email ThisBlogThis!Share to TwitterShare to FacebookShare to Pinterest
Filed under Books and reading, Injuries, Stuff from the past