I just got back from Amritsar, which was incredible. You know I’m not a particularly religious person, in fact, I’m probably the least spiritual person I know. My moments of “prayer”, or meditation, come in the every day, I used to get Golden Transcendent moments by watching the sea go by on Carter Road, for example, or now, driving through a particularly attractive bit of Delhi. But, on the whole, spirituality has never been my thing.

I don’t know if a place can have a vibe, but if it does, the Golden Temple is right up there.

There’s something to be said about a place invested with so much hope (and so much blood thirsty history). It resonates through the marble, under your feet, in the calm in the middle of chaos. It seems almost as if everything slows down for a second, while you drink it in. My picture doesn’t do it justice, but it is absolutely stunning.

The reason I picked Amritsar was simple enough. I made a friend while I was in Gokarna (let’s call him Jerry) and he was due to travel through North India, before he left back for his own country. Did I want to go anywhere with him, he asked, and since I’ve always had an all-abiding love for the Punjab, I picked Amritsar. It’s my third Punjabi experience (previously, Faridkot and Chandigarh) and by far the prettiest, even though the city itself is all screaming chaos.  It was also an interesting lesson for me in travelling like a foreigner, by myself, I am mostly left alone, but add one Boy From Distant Shores, and suddenly I was a scam magnet. It makes you feel kinda bad for all the other tourists who go through India, by the end of the day, I was so tired of people hassling me, I wanted to yell, “Shut uuuuuuuuuuuuuuuupppppppppp!” at everybody.  We got (almost) cheated twice, but Jerry is most masterful in his command over situations (thanks to travelling through India for the last three months) and I managed to delegate all post-negotiation-negotiations to him.

An aside: if you’re going to stay at the Hotel Golden Heritage, DON’T. The sheets were all crusty with something, which I only discovered at 11 pm, and when I asked for a new sheet, the manager absolutely lost it, and began yelling and screaming. We checked out the next morning, and moved to the lovely (and affordable) City Heart, which I would recommend highly, not least because they have a Barista right in the hotel for your morning cup.

Food wise, we did quite well: Brother’s Dhaba for kulcha and daal, Kesar Da Dhabha for more daal and kadi, Surjit Chicken for brilliant fish, Crystal (eh, not worth the price) for mutton and more chicken, and Chawla’s chicken (EXCELLENT) for really good tandoori chicken. I have eaten my weight in food now.  Jerry left the ordering up to me, and didn’t have any dietary restrictions, so I basically just let myself go and had a party. 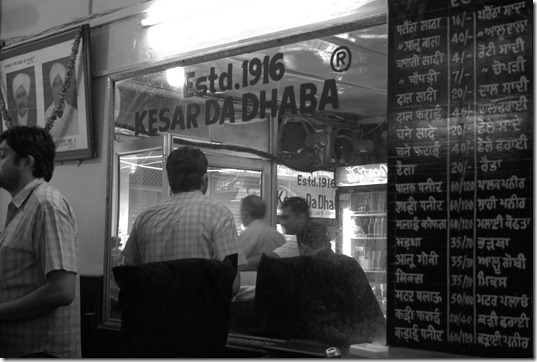 More friends joined us the next day, and we pottered around doing this and that. We had visited Jalianwala Bagh already the previous day, and as luck would have it, it was the 92nd anniversary of the massacre on the day we left, so we decided to go back and see the ceremony. Which was a lot of people giving speeches, but I’m glad I went again. A lot of people choose to skip it, because it is rather depressing, but in my opinion, it’s an important historic site, and it was nice to see something from my history book come to life. Also, besides everything, it’s a beautiful park, and it’s nice to sit under the trees and watch people go by.

Speaking of historic things, we absolutely had to do a trip to the Wagah Border while I was there. My other friends were also foreign, so between them and Jerry, they flashed their passports and got shown to the VIP section, while I was unceremoniously herded to the “commoners.” We went back and forth a bit, and finally, the guard, just to shut me up, sent me off with them. And then, in my ladies queue, my water got taken away while they got to keep theirs, and it was all very annoying. Plus it was hot, and I was getting grumpy thanks to my lack of sleep the night before (see: crusty sheets). But soon, it started, and I cheered up. It’s just so funny, watching the guards almost kick their turbans off as they walk, all to the chants of people going, “Vande. Materam!” etc. There were LOADS of people, surprising for a weekday, but then I learnt it was a holiday. This is what happens when you work from home, you lose track of everything. 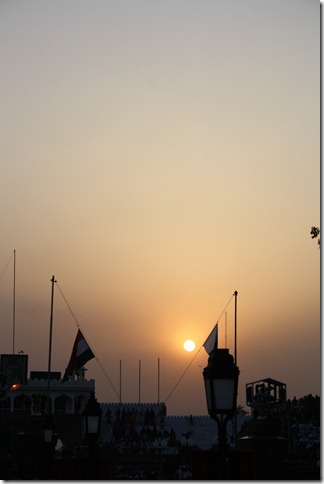 So, I discovered my inner Punjabi, learnt what it’s like to travel like a foreigner, found (at a certain level) spirituality, and ate lots of food. That’s quite a bit for a weekend trip, right? I thought so.

Email ThisBlogThis!Share to TwitterShare to FacebookShare to Pinterest
Filed under People I meet, Travelling light