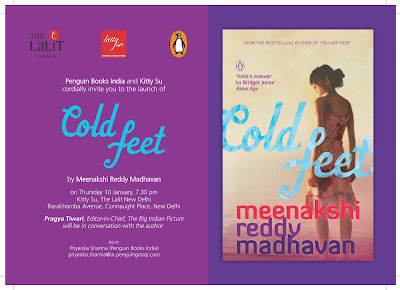 I'm super excited about the party, primarily because it'll finally feel like I have a book out. Releasing your book at the end of a year is a terrible idea, because it gets swallowed up by all the year end recaps and so on. Plus this was the December of Horrible News, so we couldn't have--even if we wanted to, which no one was in the mind space for--had the party then.

I'm in conversation with my dear friend Pragya Tiwari, editor of the best (and only) space for long form journalism on Indian cinema. Pragya and I have known each other for about four years now, and even though we're rarely in the same city at the same time, every time we meet we chat for hours. It should be a really fun discussion, and I'm looking forward to it.

I also have three readers, who are a mystery surprise! But I've known them for years and years too, and they're going to be awesome.

Email ThisBlogThis!Share to TwitterShare to FacebookShare to Pinterest
Filed under Major Events, The Book