Thirty two years have I,
No longer young and fit and spry.
Thirty two years of laughing and lucking,
Considerably less of dancing and fucking.
Thirty two sounds very, very old,
I’ve learnt fortune does favour the bold.
These feet have been in quite a few places,
This brain has forgotten many faces.
These eyes are better than the ones I was born with,
The epic hangovers are no longer a myth.
Sleep only comes when I’m in my bed,
Not—alas carefree twenties!—on buses, planes or horse’s heads.
At thirty two, life makes you Plan,
Life Insurance? Marriage? Babies? A man?
Of assets, I have but a few,
A car, a cat, and you, and you, and you.
Thirty two years this December,
Thirty two years I’m happy to remember.
But it’s August, why now, why think, you ask,
After all, winter has yet to pass.
But when one’s thirty-one-th moves slowly into thirty two,
There’s ever so much planning one has to do.
Thirty one-and-a-half years have I,
Thirty-one-and-a-half, twenty-one-year-old-me, do I hear you sigh?
Age is just a number, a figurative concept,
But ultimately, something we all have to accept.


A couple of months ago, I posted this poem on Facebook. Okay, so it's not the world's best poetry, but it summed up what I was thinking about ageing. Ageing is weird. I started this blog at 22, and here I am, 10 years later, still trying to figure out the Meaning Of Life. Some things I have sorted, some things I know as truisms, but mostly, here I am, along with the rest of you, muddling my way along. I wrote a couple of books these last few years, and while I'm not the "acclaimed" author I longed to be by now, I know that writing is my thing, the thing I'm going to do for the rest of my life, while trends ebb and fall, critics come and go, and books may move beyond printed pages to meaning something else entirely. This will happen even if I don't win prizes or make a lot of money doing it. I always have my words and words will earn me a living, depending on who's buying. 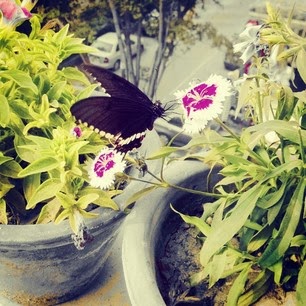 On the other hand, as I'm summing up, I think of all the things I'm grateful for. This man, for example, the one sitting in front of me in his lungi, the one unexpected who became so entwined with my life that I now can't imagine one without him. Loving, when it's done right, is intimate enough to hearken to a family member, this guy is my partner, my boyfriend, my best friend and my brother all rolled into one--different roles for different days. Love, when it comes, is a slow feeling, a morning when all is okay with your world, an evening somewhere doing something perfectly mundane that suddenly is tinged with petrol-in-a-puddle rainbow colours, just because someone is holding your hand as you cross the street.

This is also the year I moved into the Flat of My Life, and since moving in, I haven't had a moment alone with it, which is oddly fitting, because the Flat of My Life is open and welcoming to all the people I love so dearly, and its rooms aren't meant to be hoarded by the single woman with her cat, but shared with a multitude of people. The dining table is suddenly "too small" for the largess on it, the rooms are full, all cupboards are occupied, and yet, there are pockets of the day when I can retreat to a corner and be by myself just to recharge. The cat has stopped trying to escape it, like he used to in my old house, which had such bad vibes I wanted to leave almost as soon as I moved in. He suns himself in the balcony, and has his little nooks and corners where he retreats, just as I do.

This is the year stuff changed slowly but for the better on the professional front. I like what I do, which is amazing, because it's the better half of my week just gone on doing what I do.

And in the world, which is greater than my own insular little life, this is the year people started talking about things: feminism became mainstream, politics affected my whole disaffected generation, you got a little scared of what you were putting on the internet, the world collapsed and it rebuilt, collapsed and rebuilt, so often that you skipped the headlines unless it really mattered to you, and still it continues: collapsing and rebuilding.

"What would you wish for, if you could wish for one thing?"

Email ThisBlogThis!Share to TwitterShare to FacebookShare to Pinterest
Filed under Major Events, People I love, Ruminating, The Cat, The Housewife, Work type things