#SojuParty! The fun we had with this Korean rice liquor 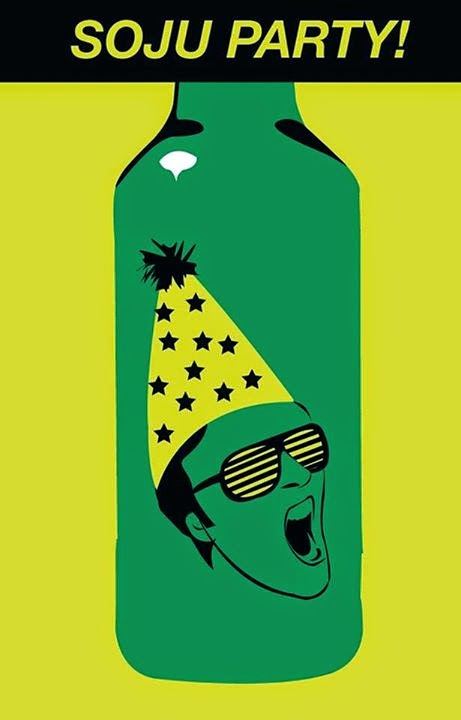 It's no secret that I love alcohol, right? I mean, not in the way an alcoholic loves alcohol--I'm not dependent on it or anything--but a Saturday night without booze is like, oh, a cup of coffee without a book. Or a festival without good food. So, when the people at Jinro India asked if I'd like to have a party with soju, OBVIOUSLY there was only one answer I could give them.

If you're reading this on Wednesday, October 8, Jinro is running a super fun contest on their page which will end at 5 pm, IST. You stand a chance to win a soju hamper, so get cracking!

I mailed a bunch of friends asking them to come over and partake of all the goodness, and the email I got back varied from, "OMG SOJU TOTALLY COUNT ME IN!" to "What is soju, exactly?" What is soju? It's a kind of Korean liquor, which comes in these squat, pretty green bottles. If you've eaten at Gung The Palace in Delhi (which you totally should), you'll be familiar with these bottles, if you haven't, it's a clear, almost tasteless liquor, with a 20% alcohol content--about the same as wine or beer. I say "almost" because once you drink it--on the rocks is best, in my opinion--you'll be aware after your first few sips of a moreishness, the way it coats your palate and a slight tang if you swish it about your mouth a bit. Light and with much more of a "give" than your usual drinks on the rocks (vodka, whiskey), there's no burn once you drink it, so it's really like drinking water. A very alcoholic water.

Abroad, soju is the top selling liquor in the world. (No, that's not hyperbole.) It sells THREE TIMES as much as Smirnoff, and Psy (Gangnam Style) has declared it his favourite drink. Not a lot of this has filtered to other countries--South Korea has the world's highest per capita liquor consumption-- but it's starting to now. There are bars in London and New York devoted to soju cocktails.


I had Googled a few to figure out what to serve the soju with, since I'm a bit of a novice, and realised I could mix it with pretty much anything.  I mixed up a bowl of tomato juice with lemon, pepper and Tabasco sauce, so people could have Soju Marys, as well as a bowl of cranberry juice, Cointreau and soda for Sojupolitans. My own personal favourite, however, like for many of my friends, was like I've mentioned before: just a glug of Soju on ice. You need short glasses to serve these, but I soon ran out and had to give it to people in wine glasses, which didn't really take away from the experience, so it's all good.

{A digression: snacks for a party are always hard to manage, especially if you don't have help that comes in more than once a day. This is where I discovered--at the very last minute!--premade snacks from Green Chick Chop. (There are branches all over Delhi.) I bought a bunch of chicken samosas and momos, as well as cheese samosas, and just lightly panfried them, bringing them out for people to eat in batches. My plan was to serve dinner as well, but they were filling enough that no one really needed dinner. So there's a party tip for the future! (You're welcome.) (I also have enough leftover in my freezer for drop bys now, the advantage of having a party that starts at 9.30 pm, after everyone's already eaten.) (We've all come a long way since when we could eat dinner at 11 pm and still have a good night's sleep.) (The momos especially got a rave review--and those I just nuked in the microwave.)}

I invited 15 people, out of which about 14 showed up, for which I had six bottles of soju--we figured one bottle per three people was a good ratio. (Here are the places where soju is available across the country.) For Rs 315 a bottle, the party went on till the wee hours, with no one even needing anything from the back up bar I already had in case of emergencies. Win-win!

This weather is kinda insane, though, right? I think one of the reasons the soju went down so well is that is was SO hot and sticky (and, just my luck, the AC in the living room stopped working), that everyone was really happy to have a light, refreshing drink. Red wine in this weather is a GUA-RAN-TEED hangover, but the morning after this one, I was still as fresh as a daisy. A tired daisy because parties are hard work! But no headache, no cotton mouth, no feeling like I had to upchuck at the sight of food. That, in itself, is already a HUGE bonus.

{Another aside: I met a bunch of very young twentysomethings at a party last month, and proceeded to give them my thirtysomething wisdom as they gathered around me, faces as fresh as flowers. I remember the one big takeaway I had, which I told them about, like a crone prophesying the future: "A two-drink hangover is EXACTLY the same as a ten-drink hangover in your thirties." Uff. SO. TRUE.}

Would I buy soju again? Absolutely. With the combination of reasonable pricing (you seriously can't buy any liquor worth having for under Rs 500, except maybe Old Monk, and Old Monk and I are not speaking at the moment), easy drinking (perfect for daytime AND night parties) and no hangover the next day, COUNT ME IN.

Anyway! On to the photos! These are all taken with my phone for Instagram, and there was a certain point in the evening when things got a bit blurry, but we all had a lovely time.