Newsletter: On the road again

That's right, friends, we're in Goa yet again, in a desperate attempt to get the most out of our rented house before we give it up for good. Because I think that's what we're going to do--give it up. Our Goa experiment was great, we loved getting to know the place as actual CITIZENS, but I find myself slightly annoyed this time that I'm not given the choice to go somewhere else instead, like Gulmarg for more skiing for instance. Or rather, that I feel obligated to make Goa the choice, since we have the house there and everything. (I know right? This is the DEFINITION of first world problems. Uff.) But the next two months are potentially heavy travel ones for me (literary festivals) so this is likely to be our last time in Martha's house. Not our last time in GOA, it's under our skin now, our second home, but I look forward to a short term let, where we don't have to worry about the house being empty for so many months and all the wildlife coming in.

However, it's going to be a short visit, as a cousin of mine is getting married in Hyderabad and Delhi, so we will be hopping across the country like skipping stones. (Which reminds me of the only good Black Mirror episode of this season: Hang The DJ. Did you watch it? Did you like it? Send me your thoughts.)

This week in DIY: Cannot take any credit for K's automated cat feeding machine, since I mocked and groaned pretty much the entire time. He is the mad scientist in our relationship, while I am the Doubting Thomas. (Which is a sort of USEFUL role, if you think about it. He hears all the critique and can improve himself accordingly. I'm rather invaluable, I would say.) Anyhow, he wanted a way for the cats to be able to feed themselves when we travel for short periods of time. Najma, our housekeeper, will still be coming every day to feed, water, and check on them, but this way we stress less. Presenting... the first ever Ganz Automated Cat Feeder. 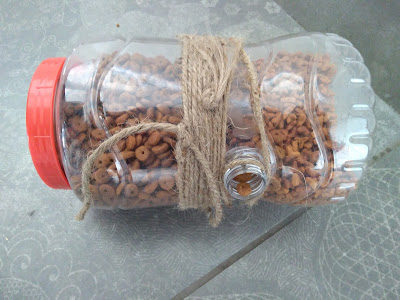 There are two of those spouts on either side, to keep the food regulated as it comes out. Out of our three cats, only one has figured out how to work it, and he is overeating so much, he keeps throwing up. The other two are wary--Bruno has almost mastered it, but Olga refuses to, preferring instead to come and twirl around my ankles or press her face against mine and make little encouraging chirps so I'll get up and feed her. I always thought she was the smartest cat because she keeps escaping and making a life for herself outside, but it turns out she would actually starve without us. Comforting... ish.

This week in books and reading: Which all begins from my slightly-before-New-Year's resolution to stay offline more. I use an app called Internet Off, which is an open source version of the paid-for app Freedom for Mac. Internet Off lets you turn off your internet--duh--but you can also schedule it, so you have to stick to a certain number of offline hours a day. If you don't trust yourself, there's an option of putting in a password, which you can get your friend or lover to set, taking the control away from you. But now it's been a week, and I can honestly say, apart from days like this one where I'm using the internet to send out this email to you, I don't miss it. I check my email/Twitter/what have you from about 10 to 11.30 and then the computer goes offline and I turn the data off on my phone as well, so what I have is a very quiet and peaceful time. I am doing more writing, but what surprised me is how much better my reading got as well. I always read, it's not new, but now I read with concentration, not distracted by pings and bings, letting my mind wander whenever it wants to, jumping up to check my bookshelves every now and then, because I am at that glorious time as a book collector--I probably own the book I'm thinking about. My little Book of Books is filling up as well, because I make it a point to note what I'm reading and my thoughts on it. And as an additional experiment, I'm posting every single book I read on Instagram, you can find the ones I actually recommend under the hashtag #mrmbookclub

Which brings me to what I was reading; a Japanese crime novel called Six Four. Ever since I read Louise Penny, I have been filled with the desire to read crime literature from around the world, making it both fun AND a learning experience. I do love crime books though, I'm not sure I'd ever write one, because the mystery I'd write would have to be crazy and intense, full of red herrings and you'd gasp by the end when I reveal the killer, and I haven't yet invented that sort of mystery, but in all my readings so far, I think I'm getting better at spotting the murderer before the book is over.

Also a reading resolution: more Daphne du Maurier! Just read The Parasites last week, and was struck by her observations and how human all her characters are, which is the sign of a rare talent. Next on my list: My Cousin Rachel.

I also watched the first episode of Alias, Grace on Netflix recently and enjoyed it so much, I am going to read the book side by side. Oh and here's my first books column for the new year, including Ants Among Elephants, which I deeply enjoyed.

Wednesday link list which is extra long this week because these are LAST WEEK'S links as well. What a treat!


It’s hard to see sweet, loyal Meg marry a man so self-involved that when they have twins, he starts frequenting a very dodgy sounding establishment (it’s not entirely clear how dodgy) to avoid nights “broken by infant wails”. Marmee advises “captive mamma” Meg to remember she’s a wife as well as a mother (thanks, Marmee), but eventually Meg’s husband takes matters into his own hands by letting the babies cry it out. And it’s hard to see Jo’s roguish best friend Laurie marry the selfish Amy, and perplexing that Amy seems to get the happy ending after she has been so mean as to burn her sister’s manuscript, the work of years, out of spite.

- While I'm slowly coming round to Jo and Professor Bhaer, I will NEVER like Amy. Here's a piece on the upcoming adaptation, which I'm still totally looking forward to.


“We hear calls in our sleep, in our dreams,” Anu, who has been with the call centre for just over two weeks, says. “Sometimes my family calls me on my mobile and I pick it up and say ‘Namashkar, PCR channel number’…and they say, ‘Have you gone mad?’”

- Lovely story on what happens when you dial 100

By analyzing enough Facebook likes, an algorithm can predict someone’s personality better than their friends and family can.

- I didn't know which of these 74 "things we learned in 2017" things was the most interesting, so I picked the most disturbing.

- Again didn't know which one to pick from Ladies Finger's list of 100 times they were happy to be women in 2017, so have my favourite.

Three years ago, a cat called Raja didn’t come home. He didn’t come home the next night, or the one after that, or the one after that—until his family, the Tuttles, who lived in Florida, eventually gave up hope. Then, three years later, Raja turned up at an SPCA shelter in Georgetown, Delaware. A microchip helped identify him, sparking a multi-state search for his family, which had since moved to Virginia. A week ago, finally, they were reunited with their pet. The cat, Delaware Online reported, had little to say about his dramatic journey—beyond a throaty, enthusiastic purr.

The job was easy, he said. All he had to do was call people in the US from a list, introduce himself as Charles, and tell them they were under federal investigation for tax evasion. One out of 10 people would freak out, he said. At the first hint of panic in their voice, Saluja told them he was going to transfer the call to a different department, where one of his seniors would help them pay their taxes through an online money transfer.

- Very much looking forward to Snigdha's book which comes out this month!


. “See, if someone is online at twelve in the midnight, it means either they have no social life, or they are lonely,” Vinay told me. “In such a scenario, I have the option of posting either serious stuff, or inspirational stuff about life, love, friendships. And you, as a reader, would choose from one of them and share. More often than not, it’s the latter that helps and has more chance of going viral.” Similarly, Vinay said, someone waking up in the morning to commute to work is also not likely to want to read serious material. The company, he told me, has a good idea of what kind of material should be shared at various points of the day.


- If you like schadenfreude (and who doesn't?) this is a delicious deep dive into how ScoopWhoop is fucking up.