(A little behind on posting here, so this edition is two week's old. For the latest, subscribe!) 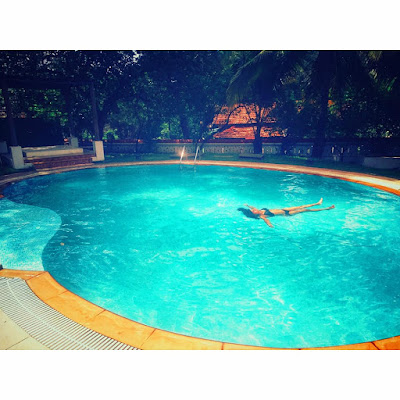 What can I say about Goa in the monsoon that you're not already picturing in your head? It's slow, slower than usual. There are fewer people on the road, and most faces are brown. I'm just eating and sleeping and working--a lot of deadlines this past weekend meant that this newsletter is a late one--but I feel more relaxed, just by being somewhere cool and rainy. It's funny how even as a modern day human, we're as affected by the weather as our caveman ancestors. Delhi is a boiling circle of hell, at least it was when I left it, and that definitely knocked on to my mood and my energy levels. Constantly an Irritable Sloth, basically.

It's not even raining that much yet, just a few showers to punctuate the day. Over the weekend, we've booked a hotel in Panjim, and we're going to spend a few days there, but for now, we're staying with friends, lounging about on their sofa, watching the World Cup.

Yes, I am watching football! I don't know why the World Cup is the only exception I make to watching a sport game match on television, because sports = boring, there's only two outcomes: you win or you lose. There's no middle ground with sports, no shades of grey. I find that very dull. But with the football world cup, I think I invent little stories about the teams, imbibe each time with qualities of the country, plus it's quite a quick game, so you can use it to while away an hour and a half, building camaraderie and all the things one builds when one is watching a team sport. I also have made it more fun for self by picking a team out of each group, and have an ALMOST perfect score (Germany let me down). (My picks are on Twitter!)

This week in my occasionally pish-posh life: The first week we were here (last Monday? Gosh, time really HAS slowed down) K's mum was here as well. My mother-in-law, that makes her, but that is such an adult relationship--a HUSBAND, a MOTHER-IN-LAW, holy shitballs, and me only nineteen years old! (I don't think I'll ever be old enough in my head to have actual children.)

She had booked out this amazing Airbnb called Villa Josephine, somewhere in Mapusa. And if you're familiar with Goa, you're going to be like, "Mapusa? Really?" but evidently the area has some quiet roads besides the teeming main market, and Villa Josephine is one of those homes. Part of it is an old house, renovated, the other part is new made to look like old, and there are four bedrooms, which include two ENORMOUS suites, and a palm leaf shaped pool outside, and it was all very pretty and delightful. (Zero internet though, so finish your deadlines and go.)  K's mum specifically picked it because it accepted pets, so began my Month of Dogs, with Lily The Rescue Spitz, who is now a pish-posh dog in her own right. 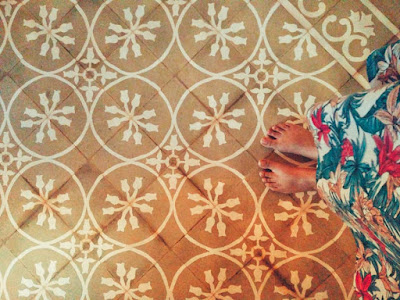 [The other two dogs are Meghna and Ralf's--Simba the Rottie-Doberman (Roberman? Doweiler?) and Jango the indie. We have all grown very fond of each other, although I am still *slightly* intimidated by Simba, she's just so powerful looking, and her face has this stoic expression that means you can't really tell how she's feeling. However, she does like to sit next to us when we work, and she does that dog thing of sticking her tongue out and then pulling it back into her mouth, which I always associate with great contentment.]

[How are the CATS amidst all this? Well, we have left them to Najma, our housekeeper, who loves them and is used to them, so she pops by once a day to see that everything's cool, no one's starving or dying from lack of water etc. I think they'll be fine, I left TC, my old ginger cat, alone by himself for two months while I went to England with just a maid popping in and occasional friends to see that he hadn't died or anything. He was fine too, and these three have each other, although Bruno and Squishy do fight, I hope our absence means there's less to fight over.]

This week in fish thaalis: Vinayak fish thaalis, though once beloved, have seriously gone down in quality. NOT very nice. I assume the rest of the food is still good, and we are planning on going there for lunch today and trying something else, so let us see. And hope. BUT! Thanks to a prior recommendation from friends Mrig and Akshay, I remembered that there was a place in Mapusa called Spice Goa that was meant to have amazing food. ("Like Goa's Swagath," was Mrig's description.) So we went, it was super busy, but the fish thaali was elaborate and large and delicious and introduced me to the delicate lady fish in a rawa fry which was delectable. 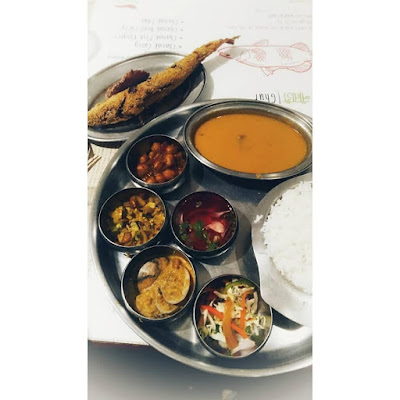 Eldou's while pretty has also got a not great thaali, but Goan Spice (like Spice Goa but reversed!) continues to be amazing. We have not yet ventured to Catherine's Corner, it being too rainy to go very far--also we'd have to drive by our old house and I feel this pang of jealousy when I think of someone else living there, even though we broke up with it FIRST--but we did go to Mum's Kitchen in Panjim when K's mother was here, and that was really good food too.

Panjim, on the whole, has some interesting food options, and I look forward to exploring them all over the weekend, most especially a place called Pinto's, which has not one single vegetarian item.

This week in stuff I wrote: I was hoping that my new column (!) would be up by the time I wrote this, but alas, it is still not published. I'm doing a series called Mythology for the Millennial (or something along those lines) where I take ancient stories and look at them through a modern lens, but in a chatty, pop-culture sort of way. It will be out on Firstpost! So look out for it there and I'll share a link next week.

Also my review of Sumana Roy's Missing is out in Open magazine.

Excerpt: If it is possible to make someone vanish by just talking around them, that is what has been done to this character. The more the reader learns, the less, paradoxically, do we know. It is as if Kobita is being bricked up behind a wall of description. Who is this woman, why did she leave, will she ever return? We are as helpless as Nayan, waiting for news to be spoonfed to us.

This week in stuff other people wrote

Very tempted to become an Instagram Influencer but a) don't actually want to approach people with a "HEY PLEASE GIVE ME FREE SHIT" b) it's probably not as easy as just messaging people for free shit and c) it sounds like it's damn annoying. (Also hidden caveat d: you can never bitch about anything if it's been given to you for free.)

Excerpt: “Everyone with a Facebook these days is an influencer,” she said. “People say, I want to come to the Maldives for 10 days and will do two posts on Instagram to like 2,000 followers. It's people with 600 Facebook friends saying, ‘Hi, I'm an influencer, I want to stay in your hotel for 7 days,’” she said. Others send vague one-line emails, like “I want to collaborate with you,”with no further explanation. “These people are expecting five to seven nights on average, all inclusive. Maldives is not a cheap destination.” She said that only about 10 percent of the requests she receives are worth investigating.

Good solid writing advice. I don't know why people get so pissed with advice articles. Just don't take the damn advice if it doesn't apply to you, no?

Excerpt: Many people are familiar with this kind of procrastination pattern — suddenly, the chores we’d typically die before doing become irresistible and urgent, because there’s one thing we’d rather do even less: work. I think people in most careers experience this, but writers tend to pathologize it, claiming “writer’s block” and, like, an absent “muse” or whatever.

The ugly Indian tourist. Much has been said about this phenomenon, but while much of the article is true, I think the onus of change lies with the Goa government and not with the tourists who are just coming to have a good time. Don't want people shitting everywhere? Put up free public toilets. Don't want dirty uncles on the beach? Put more cops on patrol. I mean OF COURSE the Indian tourist also has to change, but sometimes these changes have to be forced. There's no way a lot of these behaviours are going to change from within.

Excerpt: Many domestic visitors these days are what Sardesai calls ‘drive-in’ tourists. Arrivals in buses and jeeps are increasingly common for long weekend holidays. They eat food they cook themselves on stoves brought along, sleep in their vehicles or on the beach, and use the fields as toilets. “These people don’t contribute one bit to the economy,” says Sardesai, “They only clog up the beaches and streets and dirty everything. We have to stop this sort of tourist from coming in.”

Delhi's gold diggers. Um, not quite as glam as you're expecting.

Excerpt: “The gold dust gets mixed with the mud outside the workshops. We earn our living from the gold that was otherwise going to be wasted. It is quite similar to a barber’s shop. When the barber walks out of the saloon, he is bound to carry some hair on his body,” said Mohammad Salil, one of around 200 men engaged in the occupation.

Excerpt: I wanted to be the best footballer in Belgian history. That was my goal. Not good. Not great. The best. I played with so much anger, because of a lot of things … because of the rats running around in our apartment … because I couldn’t watch the Champions League … because of how the other parents used to look at me.