(This newsletter was sent out two weeks ago. To be more up-to-date, subscribe here!)

NB: this was going to be six nights in Delhi, but I had an unexpected cancellation and so I spent my weekend gloriously watching Project Runway and Strike and since I was watching Strike anyway, I decided to reread the last of the Comoran Strike books which I have no recollection of, having read it in a tearing hurry when it first came out. There's a new one out soon! I'd read JK Rowling's grocery lists to be honest.

Anyway, by some trick of fate, I had plans for every single weeknight this past week. This hasn't happened to me in a while--old age, darlings, old age, your friends' changing priorities, your OWN changing priorities, life, work, it'll happen to you too, unless you're one of those labrador retriever extroverts who cannot handle a night in, in which case, my advice to you is make younger friends. I thought I'd document this, a very social week in my life just so we can examine it a little closer.

"Who wants to meet a millionaire?" I said, giddy with my own wit, but K wasn't having it. He looked at me deadpan, he enjoys doing that and said, "EVERYONE is a millionaire, they're very common, what you mean is a billionaire." Well, who wants to meet a billionaire is not as fun and alliterative, I guess I could have said, "Who wants to bang a billionaire?" but most of them aren't that good looking. Much like Scarlett O'Hara, people seldom notice this about billionaires because they are taken in by their charms. In this case charm = money. Money gives you polish, an air of confidence, even if you're sweaty and your clothes aren't that great, you could buy better clothes, but like Steve Jobs, you like to stick to what you know.

The particular billionaire we were going to "meet" was a cryptocurrency blockchain abracadabra morewordshere guy who was coming to India to launch his company. I wouldn't have thought this was the kind of event I would be invited to, what do I know about wingardium leviosa? But the person throwing the party was a friend, and he said, "Come! There'll be drinks and stand-up comedy" and I am always curious about the rich and famous.

So the billionaire stood up and said things about his company, which sounded very interesting but also like they were in Latin, especially after three glasses of wine, and we settled in to watch Abish Mathew's set. He's "the other guy" from AIB, by the way. Like, you'd say, "that guy, that guy, that guy, oh and that other guy." If I'm not very much mistaken, he often plays the straight man to his friend's punchline, like not a literally STRAIGHT MAN although that too, but the person who asks, "And then what happened?" to make a joke go forward. Anyway, maybe I just don't get stand up but I have found very few people very funny. And in this post-Nanette world (PLEASE WATCH IT ON NETFLIX) it's a little dated to say, "The only privilege men have is to be able to go to the bathroom whenever they like." OH MY GOD MAN IT IS 2018 IT IS TIME TO RETIRE THAT BATHROOM JOKE.

We were at the Taj Mansingh, which is a grubbier and yet posher Taj than the others. It has not changed its decor since the 1980s I don't think. The last time I was at that particular rooftop was when you could still smoke everywhere, and Vikram Seth was launching one of his books, and there were LITERAL OYSTERS coming around on trays. OYSTERS. At a book launch! I had three, my first time eating an oyster too. (These were also the glory days of excess where a fashion designer's new store greeted me with about a KILO of caviar on ice which no one was touching because "fish eggs ew." I ate as much as I could spin out of that story.) Now however, we had to trudge down to Rick's, favourite haunt of Rahul Gandhi, which has a smoking room attached, I assume for the use of this sort of guest, but which I smoked in merrily.
Tuesday

Samit and I have been friends for so long, I don't even very clearly remember a time before we were friends. Okay, I sort of do, because when I first met him, I was 23, a young reporter with a chip on my shoulder about writing my book, time was passing and there I was with NO BOOK, and he was 25, a young writer whose first book had just come out to great fanfare. I was so spittingly jealous, I might have asked him questions which all had an ulterior motive, along the lines of: SOOOO HOW DID YOU DOOOO IT? Hmm? HMMM? Anyway, much water and many books have gone under that bridge since then, and now he is a support system and a co-moaner about this ridiculous writer's life we both seem to have chosen with no regards for the practicalities of it all.

He had a party, and I was lounging about on his sofa, drinking the sangria, talking about all those things you talk about at parties, everyone there was a good friend, so I let my thoughts stack up like a little pile of coins on the table. We got to talking about what it would be like to meet our younger selves at a party such as this one. My own twentysomething self would have rejected any words of wisdom I had to offer her with a pert "that will never happen to me!" and as Samit said we'd both have loud words, not like each other much and then go home and think about it for the next year or whatever. Ahhh but I'd like to think I'd like myself at 26, still so shiny eyed and optimistic, just as I think my 46 year old self would like me now and my 86 year old self would like all the other mes. No, actually, my 86-year-old self will be DONE with everyone's bullshit and will probably tell everyone to fuck off. (I aim to be an old lady in this regard very soon.)
Wednesday

Summer House still endures as one of the trendiest places in Delhi. Partly, I think it's habit. We love to go to a place over and over again, till we know our exact order and the waitstaff and the table we prefer. But mostly, it's because it fits into that perfect triangle: location (Aurobindo Market is close enough to HKV to be cool but far enough away that it's not actually HKV which all the trendies have ceded to the rest of the city who wander around the village sadly looking for trendy people), pricing (not the worst + some sort of shitty happy hour + who cares, we're on daddy's credit card people come here the most anyway) and music (OUNCE OUNCE OUNCY-OUNCE OUNCE OUNCE OUNCE).

But the service is shitty, the food isn't that good, and really, you're just paying for the privilege of being in one of Delhi's more cool places. I liked to think as I watched all the waiters ignore us, even as they spotted us wave and cry, that this star too would fall. It's been more than two years though, and Summer House is going nowhere. AND, irony of ironies, when my out-of-town friend said, "Please suggest somewhere nice we can meet for drinks" it jumped into my mind precisely because of that triangle.

Standing and smoking outside PDA (Diva's new cocktail bar, which is on Zomato Gold, which I have been using practically EVERYWHERE #notanad) this group of Particularly Delhi Girls walked up. Now, my friend Shrayana, who I was out with that evening, and I are both Delhi girls as well, but long years of apologising or trying to make up for our city has made us a little more--shall we say--circumspect in public. Neither of us would walk into the bar talking at the top of our voices. It's not us, it says "LOOK AT ME YE MIGHTY AND DESPAIR." Now this lot, had no problem with us listening to every word they said, in fact, I think they relished it, like a stage show they were putting on. I know it, because for a brief time in college, I tried to be that sort of Top of My Voice As I Enter A Restaurant Person. Look at how much fun we're having, my conversation would say, and when other patrons turned to look at us, I thought it was envy in their eyes. (Now I know having been on the other side, that it's just plain old loathing. Do shut up.) "Get me nicotine patches," yelled Girl One to Girl Two who was standing right next to her, and Girl Two yelled back, "What happened to your vape?" and Girl One declares, "My Juul BROKE, ya!" And at this point, I exchanged looks with Shrayana, feeling about a hundred years old, and needed my martini desperately. (Note: PDA has such good drinks, we should all go.)

There has to be a word for this collective of Delhi girls, who say "bro" like they mean it, and who talk a certain way, like Valley Girls or the Sloanes, but Delhi-ish you know? Can any of you think of a name for their collective?

You know when you're with good friends and you finally manage to spit out what's been bothering you about something, and you finally articulate it in this golden sentence, and suddenly your brain clicks into place like you've had a really good massage and that night you dream about that problem so when you wake up in the morning and think about it, it's no longer aching? That was Friday night (and happy birthday to Niyati who hosted and listened!)

This week in stuff I wrote

Remember all the Deep Dark Hints I've been tossing around about You Are Here? WELL, the mystery is over because it is the TEN YEAR ANNIVERSARY this year, and Penguin is rejacketing it and isn't it beautiful? It'll be out in August, and this version has a foreword by me, so please buy it for everyone and yourself. No events, but if you're in Delhi, let me know and I'll sign it for you at our mutual convenience. 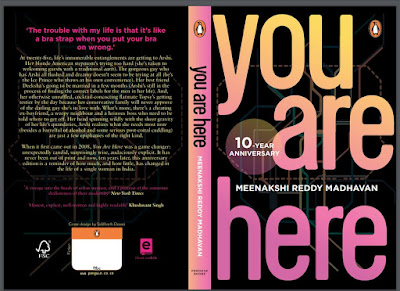 In my book recommendation column this month on Mughal women and prize winning novels. (Plus I think the best book I've read all year.)

And in my Mythology for the Millennial column, are sages ancient India's Harvey Weinsteins?