Anastasia Krupnik probably would have been your best friend.

In between reading Zadie Smith's latest--a rather hard book compared to her other, more linear, less patois plots, but Zadie and I are BFFs even if she doesn't know it--I've also been finishing the entire Anastasia Krupnik series.

Anastasia is up there with Cassandra Mortmain (of I Capture The Castle, one of the best books ever written, and incidentally, by the same author who wrote 101 Dalmations, a book that was SO MUCH better than the Disney movie and which, if you like dogs, you should read) (Here are some links to buy them: I Capture The Castle and 101 Dalmatians ) as one of the most attractive young adult heroines of all time. Anne Shirley was nice and all, but a bit too dreamy, Jo March was too "ernie", and don't get me started on the wrongness of Elizabeth and Jessica Wakefield. (Claudia Kishi was kinda awesome though. I liked her. Here's a blog about her, which is very cool.) 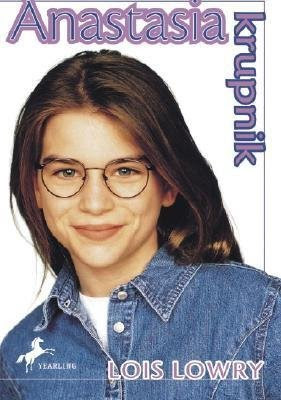 1) In her first book, pictured above, Anastasia catalogues the things she likes about herself including a small pink wart on her thumb. She (and her parents) think it's the prettiest wart ever.

2) She wants to call her baby brother One-Ball O'Rielly. (She calls him Sam in the end, but it was a good thought.)

3)  Descriptions of being an adolescent litter the books: for example, a complicated middle school ritual we all remember about how you had to act like you hated the boy you liked and scream and look pissed off every time he bugged you. But if he bugged someone else, then it was understood that all was over between the two of you.

4) The Krupniks are the kind of family you want to belong to: poet/professor father, artist mother, genius toddler. Plus shaggy dog called Sleuth.

I believe Sam gets his own series a little later, but I haven't read those. If you have, weigh in!

Anastasia is a bit like Ramona Quimby--who deserves a whole post to herself-- in that it's a very clear, very honest view of being at an awkward age. Each book is slim and deals with one adventure: posting dog poop in the litter box or running the house while her mother is away. And because of this bird's eye view, it's very detailed. Honestly, you can't complete your YA literature education without reading these.

And here is an interesting argument about both Anastasias in  recent literature: Steele vs. Krupnik.