Drawn by chanting, we leave the backpackers behind and go into a temple. It’s Buddha’s birthday after all, and we’re feeling a bit like we should note the occasion. Inside the temple, I pull my scarf around bare shoulders, signs warn us against PDA, we weren’t going to, but now the thought is in our minds. We buy incense and flowers—“In Hong Kong,” says the small Indian voice inside my head, “The incense was free.” But surely no one would rip you off on Buddha Day? – and then we walk down the rows to place the offerings in front of the sleepy eyed gold statue and I pray a little bit for a good year, love and prosperity, and I hope it works, oh Buddha, I know it’s a bit wrong asking for prosperity in front of a man who shunned it, but I’m doing the thing where you put it out in front of the universe and the universe delivers. And love. No one can deny love is.. lovely.  Not even the gods. 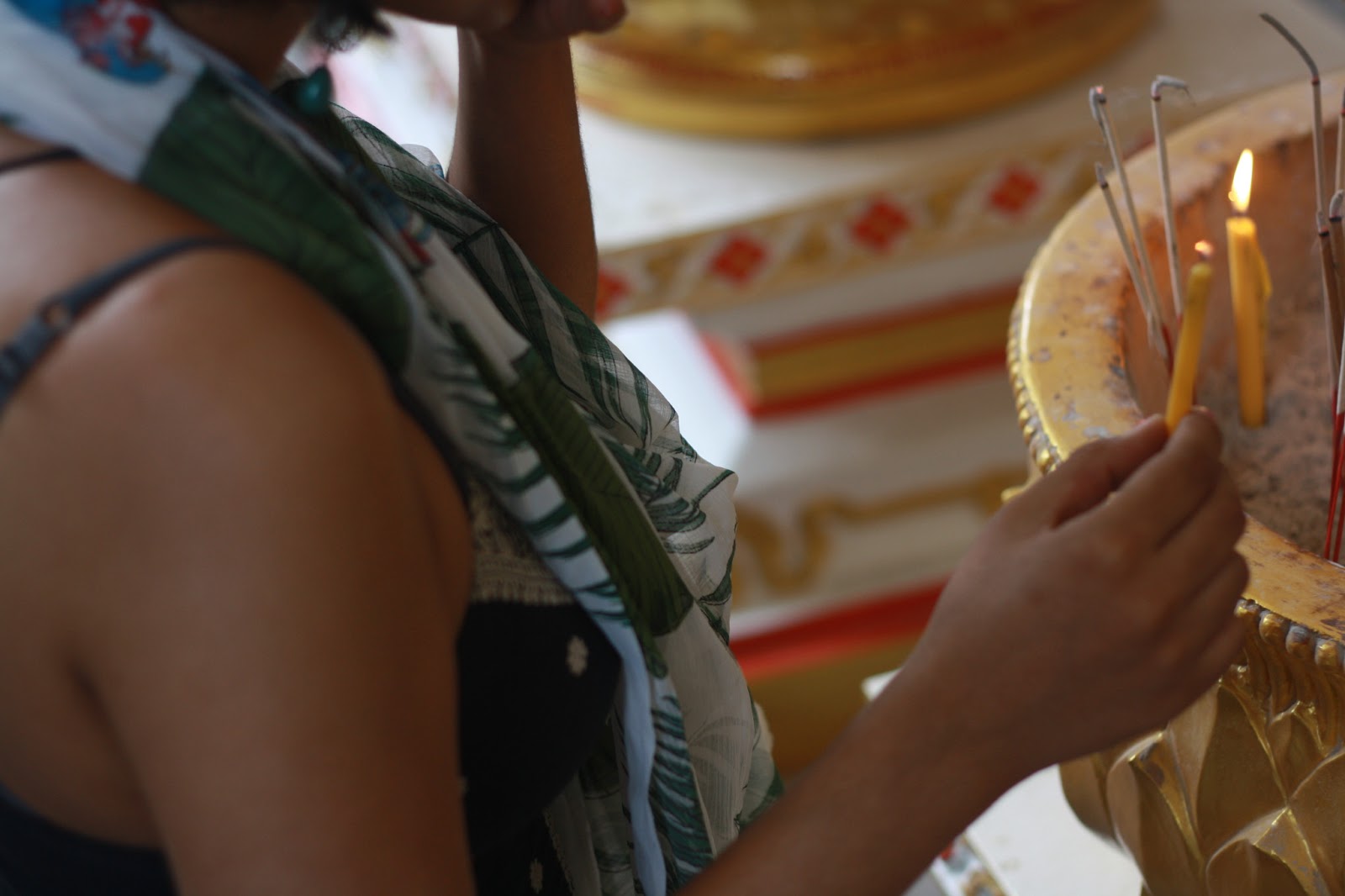 When the evening falls, we walk through the rain towards chanting elsewhere,  but get diverted by a street side market, large and maze like. It’s not in the guide book, it’s so local, that no one goes there except the Thais, and we feel like we’ve stumbled across something underground and cool. In the maze are mobile phones—fake—and contact lenses to make your eyes look bigger, and t-shirts, I buy two, one with Nutella on it and the other a little one with cats. I’m turning into a cat lady, and Thailand enables me.

Shall we take a minute to talk about the cats? A little Siamese crosses the road and flees when it sees us, but otherwise the cats are friendly, accepting all offerings as if it’s their right. A white cat called Coconut is laid across the table at a little seafood restaurant in Koh Lanta, there’s a pregnant grey one at the Seven Eleven, with fur as soft as mist. Cats wind themselves round posts and question mark tails on our ankles, the Thais like cats, and that in itself, makes this a country I identify with deeply. In Buddhism, cats are sacred creatures, and so even my own miaow miaow, who I dearly hope has not escaped again in my absence, is holy and should be treated with respect. Unfortunately, my interactions aren’t very respectful, more of the delighted “HI KITTY!” variety, but I think they get it. 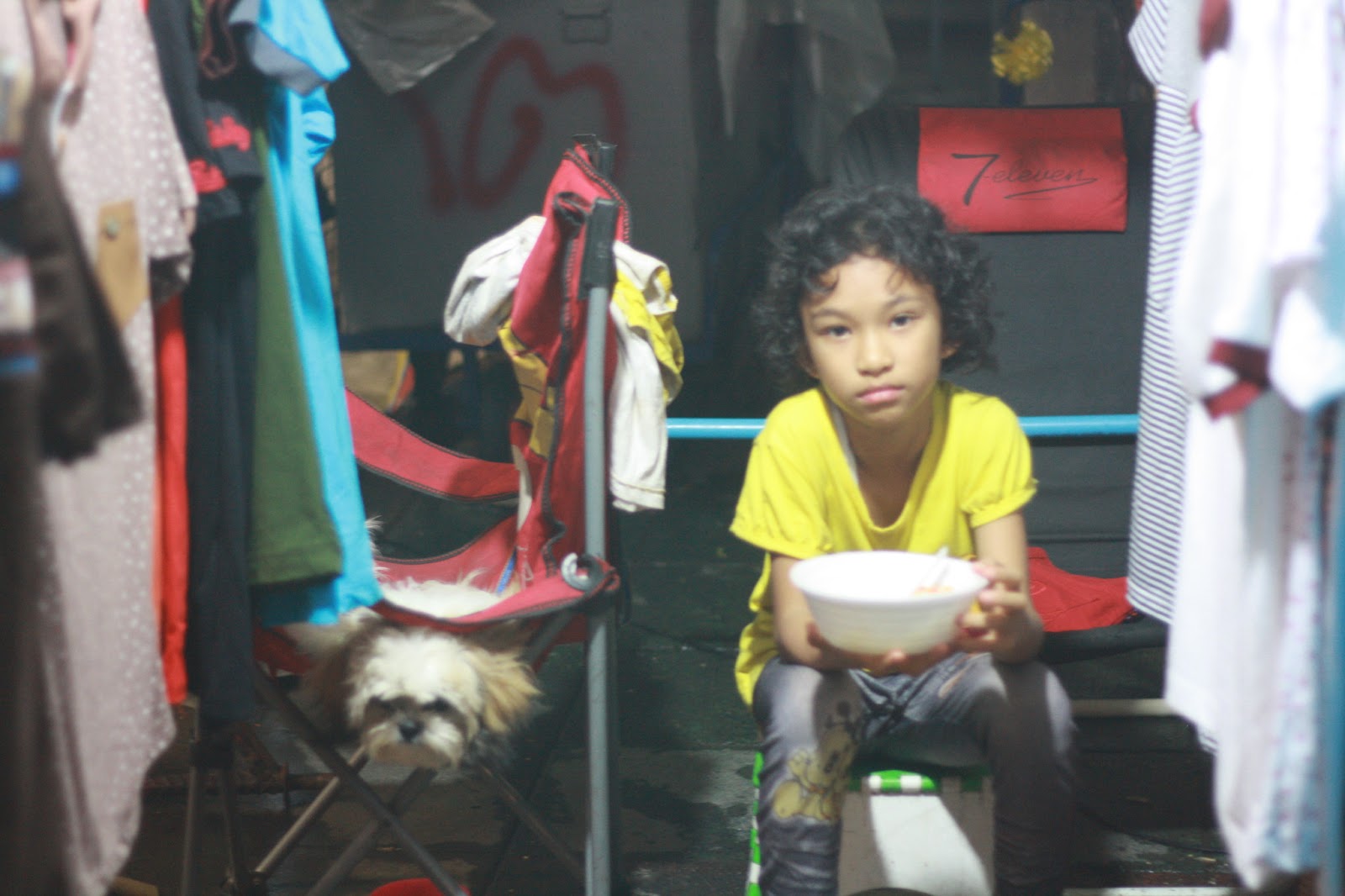 In the market, the rain grumbles, and we shield our chicken soup from the falling water, trying to eat as fast as we can. All we can do is point, and pointing yields a bowl of noodles, with one chicken leg on top of it. Later that evening, we make our way back to Khao San, by which time the street is serving contraband alcohol, and we get some in paper cups, pretending like we’re drinking coffee.

The next day, we actually take guidebook recommendations and try and get our shopping out of the way.  We spend (waste) an extraordinary amount of time in the search of a better price for the Samsung Galaxy S4, but once the boring business of that is over with (conclusion: it’s not that much of a price difference between Bangkok and India), we head to two more street markets at the further end of town. Chatuchak is loud and crazy, with lanes dedicated to exotic pets sweltering in the heat (that makes me sad) and several hat shops (that makes me happy—and on my head as I write this, wide and floppy brimmed lives one of them).

But then, after drifting around from one end of the market to the other, we decide to go a little more off-the-beaten track. Granted, it is a Planet recommendation, and the Planet has achieved mentor status at this point. I imagine the Planet as someone with a kindly voice, who steers us in the right direction. We’re walking down the street and the Planet says, “Why not try that restaurant? It has a great catfish salad, even though the loos are a bit grungy.” The Planet loses its touch a little bit later, but that could be our fault for misinterpreting it. For now however, the Planet is everything, and it is the Planet that suggests we stop by Talat Roi Fai.

It is now midsummer, proper midsummer, and Thailand was left behind almost two weeks ago. Only two weeks! It seems like a lifetime. In between, the monsoon descended and I moved house and in settling in, haven’t been able to update in a while. Forgive this line break, this hiccup, and think of me instead late at night at my dining table, low music and a cup of green tea, fingers moving as fast as they can to tell you everything I can remember and everything I thought I forgot.

Talat Rot Fai is an Instagrammer’s wet dream—I take as many pictures as I can on my SLR, but (I can’t believe I’m saying this) I sort of miss my cellphone camera and instant connection. We’ve dropped off from the world, but around me young Thais are photographing things and suddenly, I want to claw my way back into the world of the living, get someone to see where I am, how cool is this? 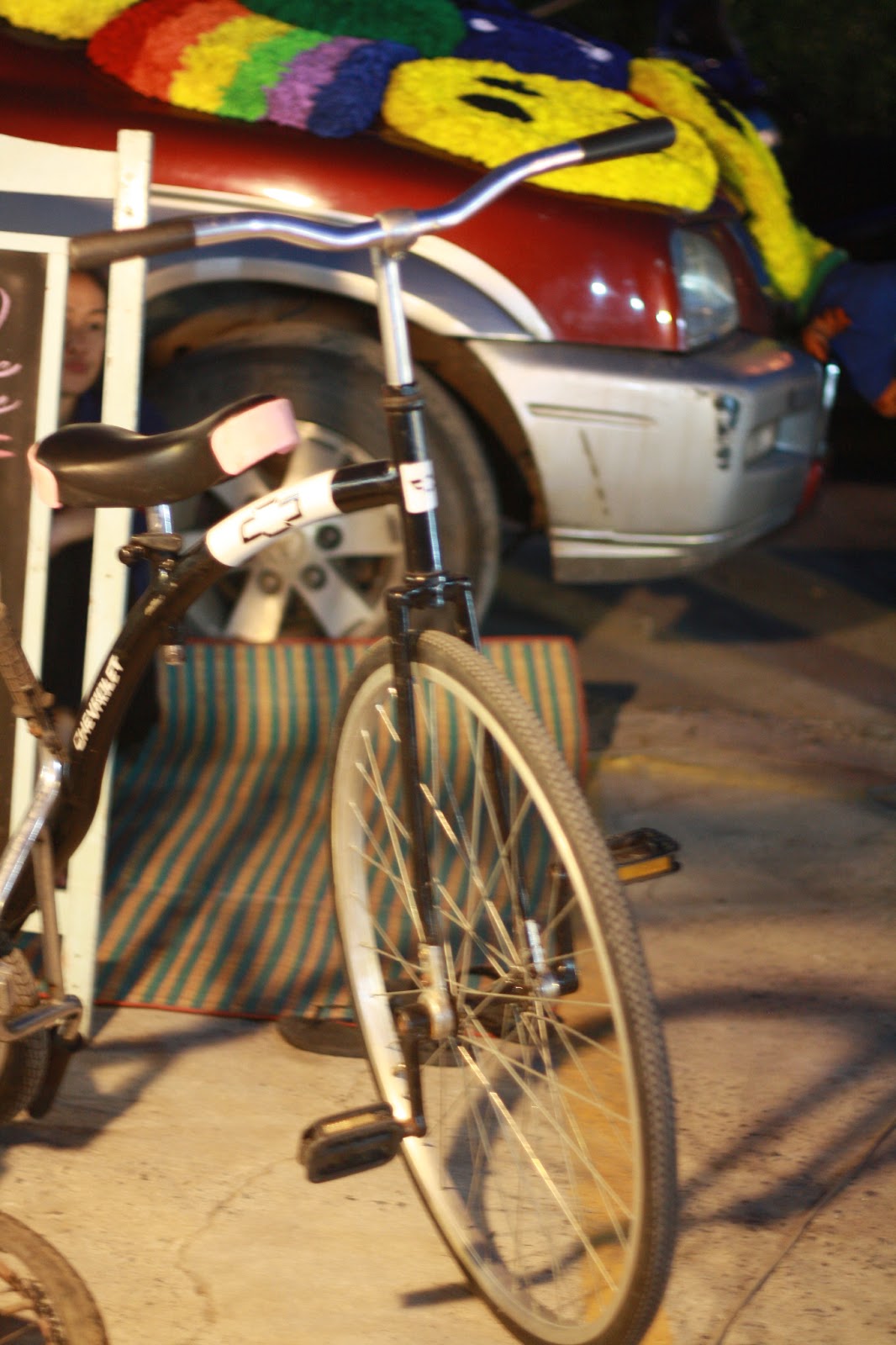 I do the next best thing: I eat a bug. In fact, we eat a cup full of bugs. 20 baht gets you a massive scoop, so with sign language we indicate that we’d like half, “For ten what get?” and so the man shrugs (foreigners, eh?) and gives us the ones I pojnt to, the least squishy looking of them all, deep fried and golden caterpillars. But it turns out in retrospect (and retrospective Googling) they weren’t caterpillars after all, but fried bamboo worms. I sort of wish I didn’t know that, worms sound so much grosser than caterpillars, but also sort of cool. Like a dare, like a sentence you would say at a party.

When I was in Bangkok, I went to a very cool underground retro street market, and walked around it eating a cup of fried bamboo worms.

Except it’s not really underground if it’s in the Planet, and it’s not really very daring if every traveller to Thailand worth their salt—at least those with adventurous palates—has tried the bugs. Maybe some even tried the scorpions the vendors offer you with an I-dare-you look on your face. Maybe that’s how they make their money, drunk foreigners going, “I dare you to eat that bug.”

Question: can vegetarians eat insects? I feel they are in the fish grey area of meat.

(Here’s a good article on what kind of insects to eat I found in my retrospective Googling. A review on my bamboo worms: “For beginners, the most ‘friendly’ insects are probably the bamboo worms, more commonly known as ‘rod duan’ or express train. Despite how crunchy they look, rod duan are rather mushy, soft and nutty, similar to the silk larvae.”) 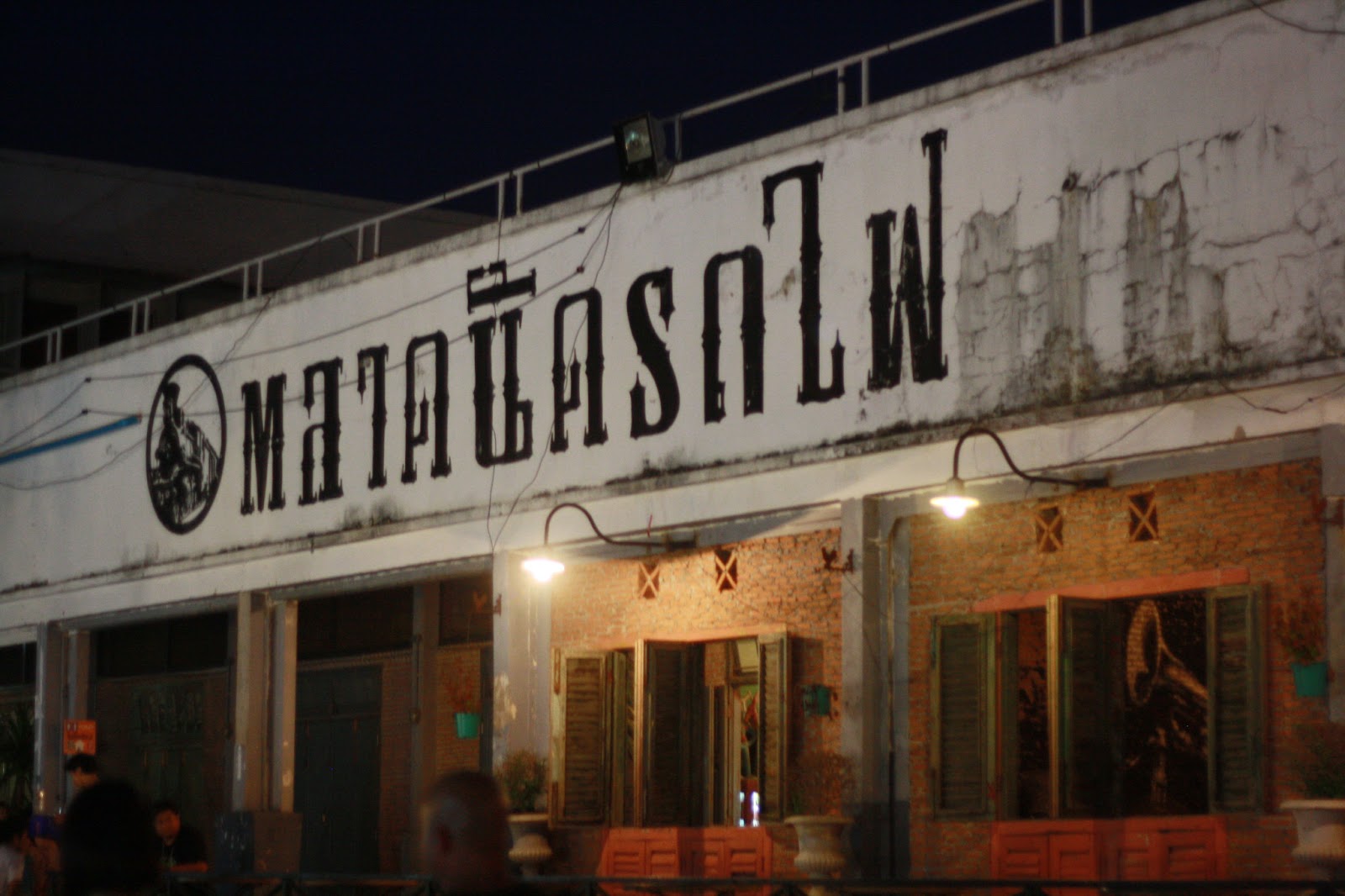 I kind of fall in love with Talat Rot Fai. We wander the flea market atmosphere,
check out action figures or test riding folding bicycles or taking photos of creepy dolls in prams, everything is super cool and super hipster including the bar we end up in, made out of the actual station part of this abandoned train yard, and we grab a sofa and get a bottle of Thai whiskey-rum (they call it whiskey but the label says ‘rum’, which makes me wonder if there isn’t a separate classification in Thai). Of course, it is Sang Som, clever reader, and we’re charged extra for a bucket of ice. Himself wants a beer, and I begin bravely on my bottle, but soon, he’s two drinks ahead and helps me. Everything is hysterically funny, from the public loos which cost money to enter and how the Thai girls are all waving their hands in front of their faces and going EW THIS IS DISGUSTING and I step in and find pretty much the cleanest public loo I’ve ever seen in a street market with a bar attached to it. Um. Please. Come to India before you wave your hand about like that.  I will show you true smelliness and you will rejoice in six months when you realise that there is no potty on the floor, only in the unflushed pot. (#cleanpeopleproblems)

This is the night we also run into a bar with ladyboys and buoyed by experimenting, watch some sad shiny strippers, but you already know that story.

The next day we are due to leave Bangkok and I’m a little sad, it’s been so awesome,  I almost don’t want to go to a beach.  We get pad Thai and go to Jim Thompson’s house. “One day, we’ll move to Bangkok,” I say, and he agrees. 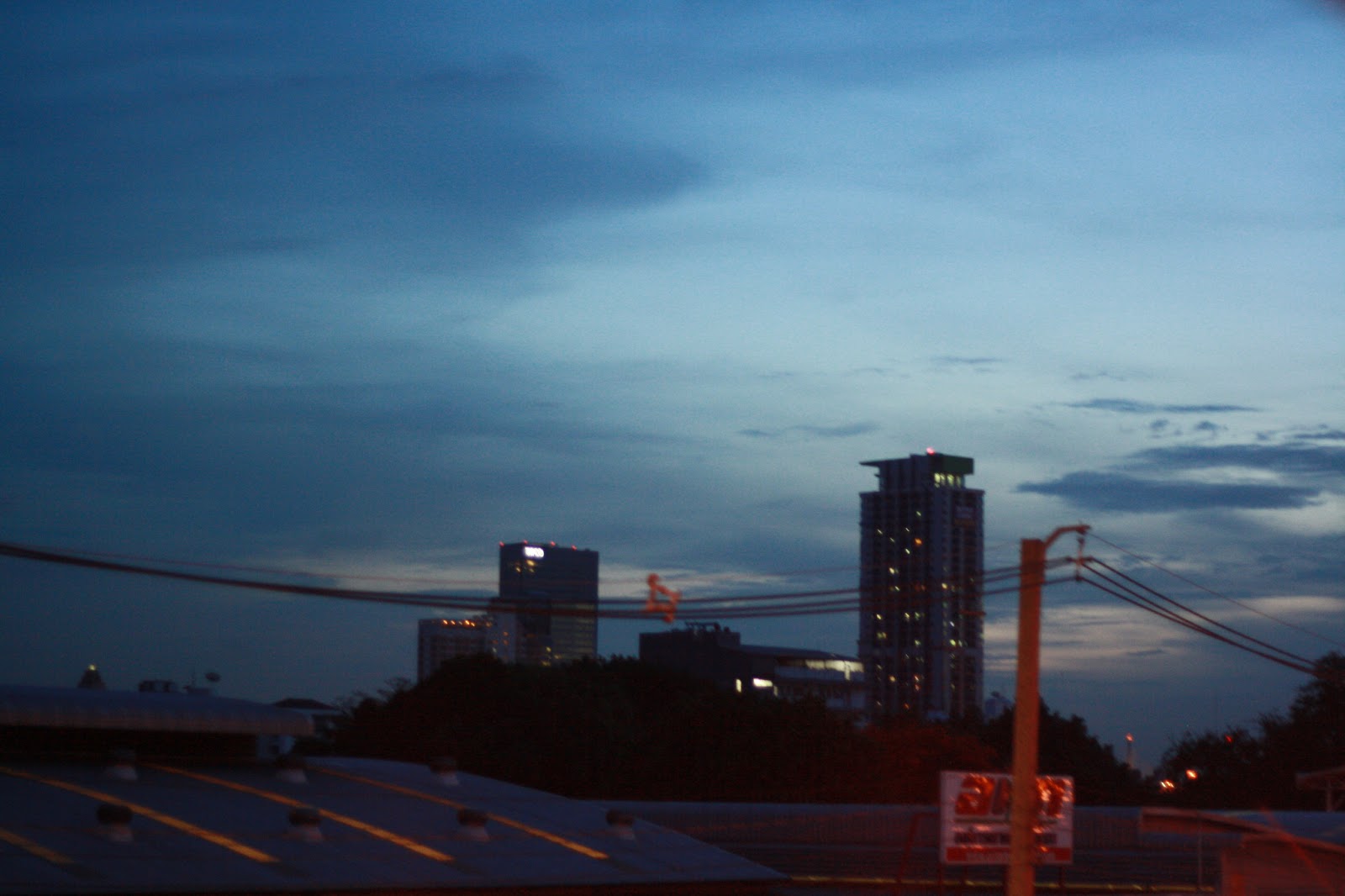