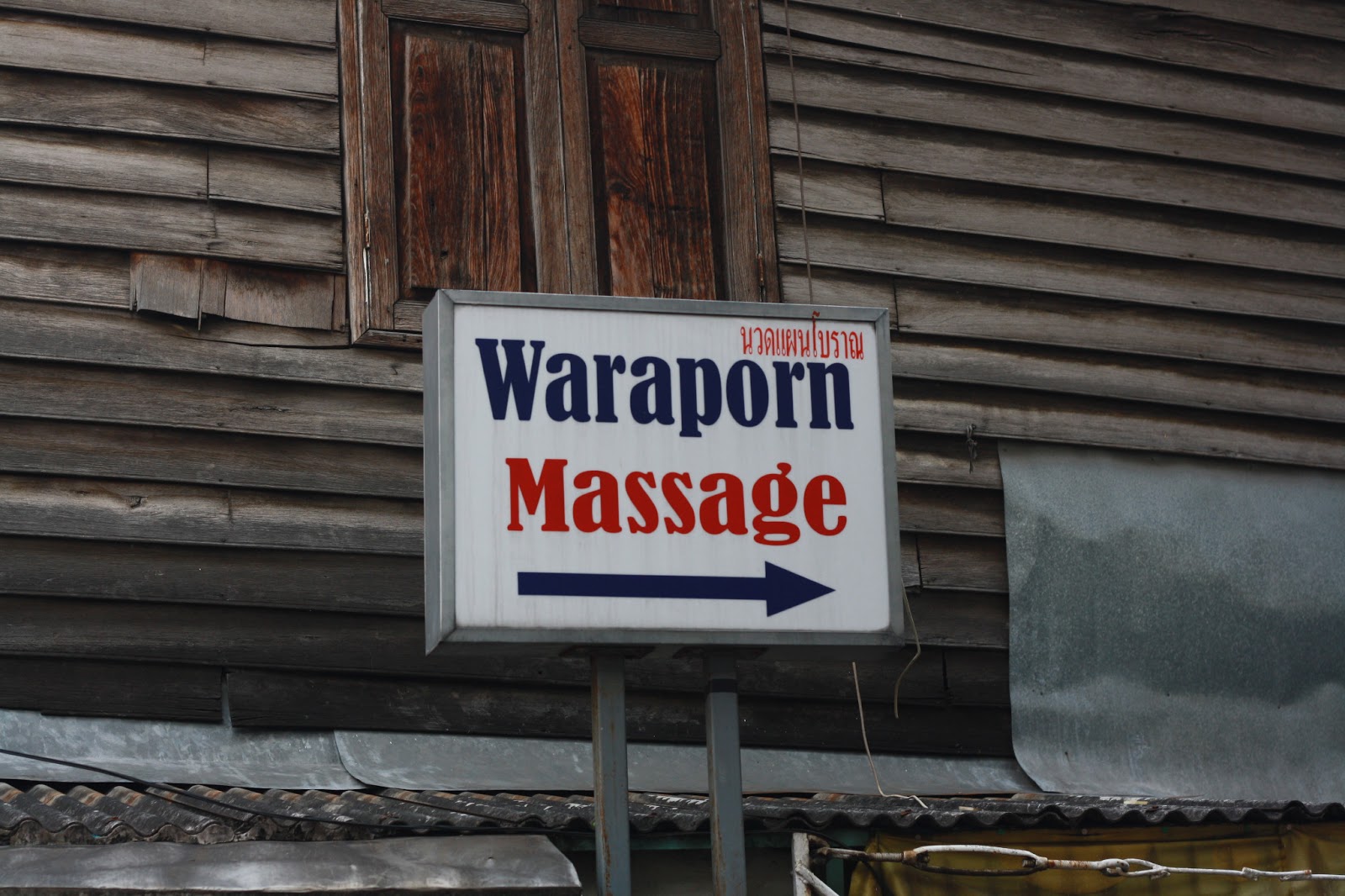 Seedy areas at night. The lights flash, the girls in a window high above you beckon. Everywhere you go, there are murmurs in the ear of your boyfriend, “Ping pong, ping pong?” One daring vendor even winks obviously, says in sotto voice, “Come back alone, eh?”

Walk till your new flip flops—fake Havaianas—give you large black bruises on each foot. Buy a plaster, feel a bit traveller like with your patched up feet. The first day, we both get a manicure and a pedicure, in the window of a beauty parlour also advertising foot massages and oil rubs. We are the advertisement, and once we’re propped up, for show, our feet in tubs of lukewarm water, a girl comes in, a young blonde from Texas, who is almost home now, after 18 months around the world. We wish we were her—except at the beginning, not the end.

The food. Some smells, on days like today, turn your stomach, when last night you drunk so much, you were sitting among girls in short skirts who touched your nose and said how beautiful it was. They twirl on poles in front of you, smiling at themselves in the mirror, the mirror behind them reflecting bare buttocks. On the wall a sticker says, “All of our girls on stage are available for your enjoyment.” We are the only ones there, stumbling in on a sort of dare to ourselves, being seated by the madam in the same uniform of pleated skirt and blouse, except she’s 40 and the girls who wriggle up next to you, are only 20, they say, and probably are much younger.  Three drinks arrive, we are presented with the bill, I’m too embarrassed to do anything except stare at the floor but he is not shy and denies having ordered them.  We stumble out as soon as we can, one drink for the prostitutes, a tip for the madam and we’re a little more broke than we were when we started. At least no one was peeling a banana with their vaginas.

Speaking of girls, they’re everywhere, young Thai women with older white guys, even writing this I see a tussle behind me, a woman with long, long black hair is disinterested in the man mauling her, but she’s still here, holding a hotel key.  Yes, the girls, bowing, smiling, are everywhere, but what catches my attention more are the lady boys, who seem to be an integrated, respected part of society. Braces seem to be a fashion among the girls, and therefore among the lady boys, last night at a bar serviced by buff topless waiters, we get to watch a show where three different groups of lady boys, each with an entourage of straight-ish boys, do a little dance to a medley. One lip syncs a mash up of I Will Survive and It’s Raining Men, and since I’m singing along heartily, she turns and serenades me. It’s oddly lovely, and her braces glint in the strobe lights. 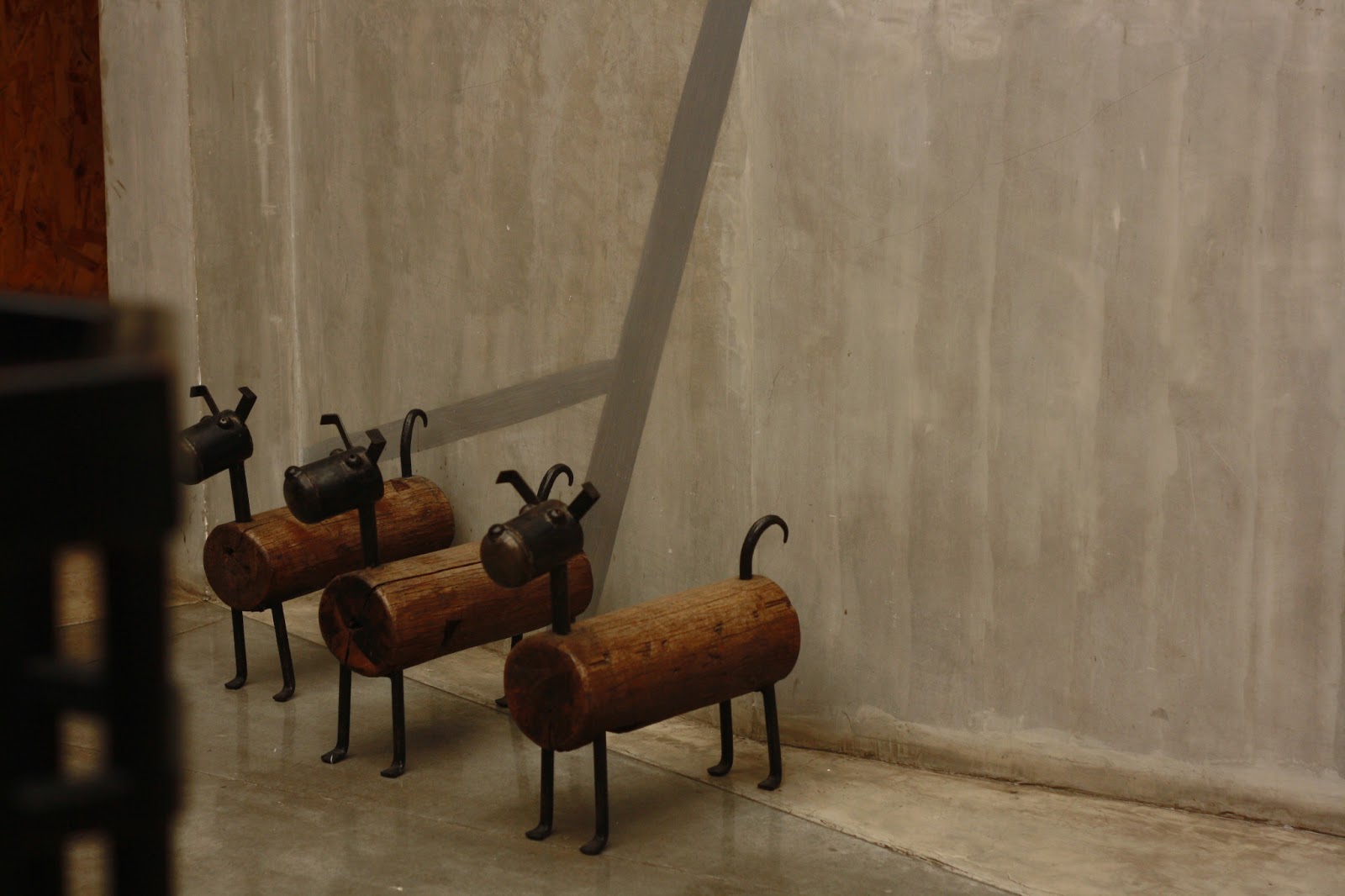 
We’re staying at a boutique hostel called Lub*d. It’s not quite the romantic holiday place I imagine, but nor is it standard business hotel, beds made with hospital corners and someone paid to pick the unimaginative landscape in the corridor. In fact, whoever designed the Lub*d is nothing if not imaginative, we have the double room on top for ourselves, it’s teeny tiny, but the sink in the bedroom is scarlet. To walk down the industrial style stairs, you have to pass some wire and wooden dogs, the theatre room on the first floor has a sign that says:

Our lovely shoes are removed before all sorts of things, even right now, writing this from a hut in Koh Lanta, my lovely shoes are in front of the door, but more about that later, now I’m still telling you about Bangkok, where you’ve been a million times, and you looked at me before I left and said, “Have you never been to Thailand?” For that reason, I thought it would be swimming with Indians, absolutely s-w-i-m-m-i-n-g, but the only other people I see are brown on white, hair even darker gold, and the locals. Thai girls have not packed for a beach holiday, so unlike me, they are modest, buttoned up all the way, but at night, on Khao San road, they shimmy in tight bandage dresses with waist cut outs or cropped t-shirts with cut off shorts or mom jeans.

But back to Lub*d, at 1500 baht a night, it’s cheaper and nicer than anywhere else that got good reviews on Tripadvisor or Lonely Planet, the staff is happy to help and it’s central enough that we can go anywhere we like. If we chose, we could also make conversation with the barefoot backpackers on the ground floor, but we’re a couple, and backpackers avoid couples, we’re too on our own to be of use to anyone else. Or so I hear. 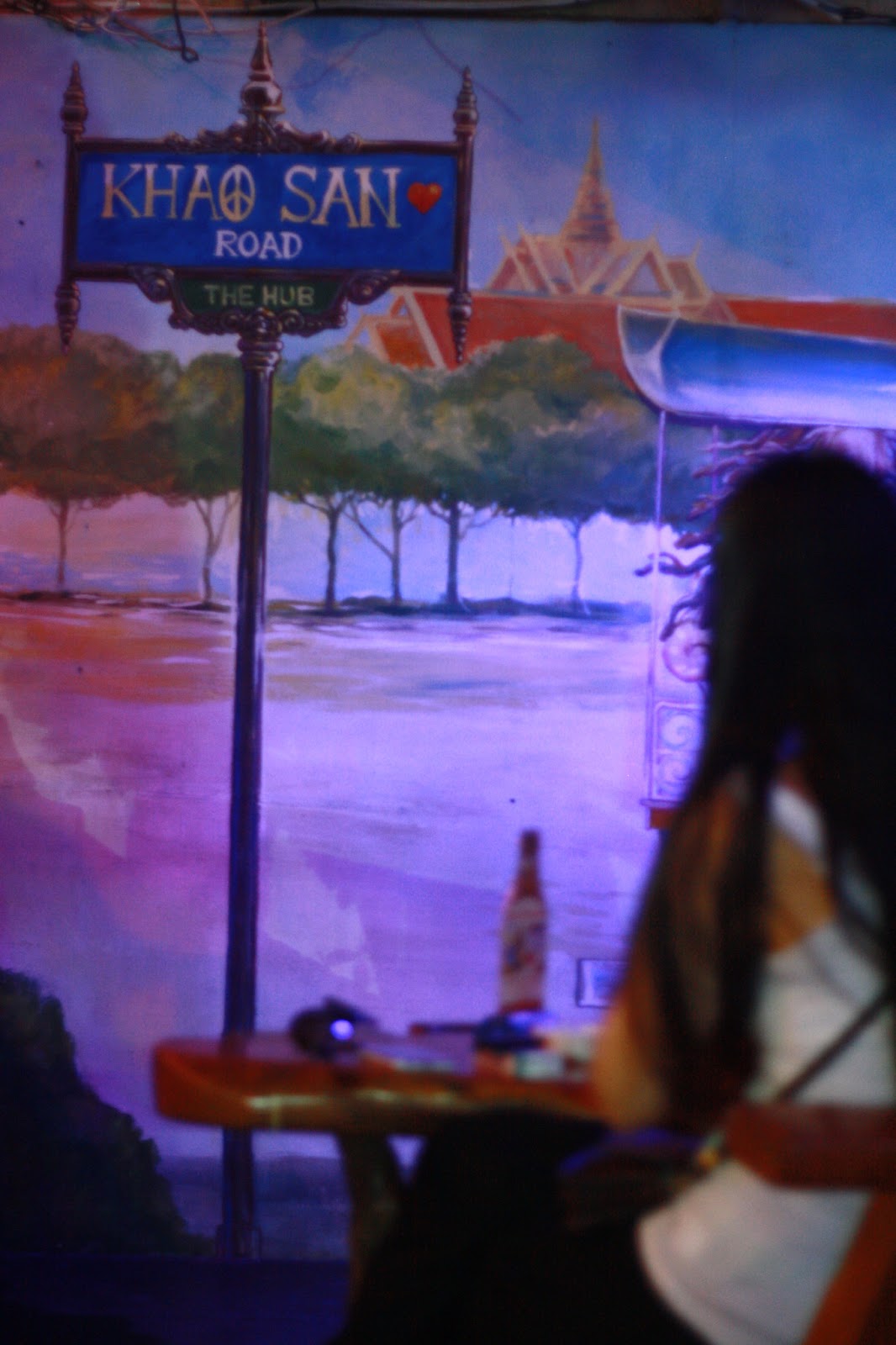 As soon as we arrive and shower, we ask to be taken to Khao San road “Bangkok’s Pahargunj,” he explains to me, and I wonder why we have to seek that out, but by this time it’s already 4 pm, it turns to 4 pm so very fast when you’re on holiday, and so I follow suit.

I’m glad I do, because Khao San is like Bangkok Lite. We’re reading The Beach together, out loud to each other right now, and we’re already at the stage of nodding familiarity with Khao San. Anne Fadiman had a lovely essay about reading books in the places they’re set, and how it’s a completely different pleasure, and it is! Also, we switch up our voices, do accents when required, and reading aloud is so much more fun than watching TV.

It happens to be a Buddha Day when we visit, the day he was born, achieved enlightment and died, so there is no alcohol, but we do stop at a street food vendor and get a pad thai tossed up for us, right there on the street. Pad Thai! Can you imagine? It’s a silly joke: in China, do they just call Chinese food, food? In Bangkok do they call an expensive restaurant dish a street side snack? Either way, it’s delicious, and we carry it along in its disposable container, pointing out sights while I try and not gouge out my eyes with the chopsticks.  Every bar is serving coffee instead, so we stop and I fall in love with a wooden frog  with a removable stick which you can run up and down his spine to make frog music. I want to take it home and make frog music for myself at night when the power goes out.
Posted by eM at 9:42 am