TC Tribute Week: JP, a.k.a The Cat Of Many Names

(The second story in my TC Tribute Week comes from my friend, avowed cat person and seriously amazing baker. You may know her as the girl behind 50 Dates In Delhi. Her cat is stocky and gorgeous, and as she mentions somewhere in the piece, a big fan of the Good Thing, whose approach to cats is to pick them up and hold them till they can't move and have to submit to loving. (It only works with him, don't try this at home.)

Some friends are just spot-on cat people, and so when they come home, you don't have to go through cat introductions. They know how to tickle a gentleman under his chin, how to wait till a lady is comfortable enough to stick her nose into her handbag. Fifty Dates is just such a friend, and here is her story.

Here's the previous story in TC Tribute Week. Here's my post about his passing.)


I think I first fell madly for cats when I read 'The Cat Whole Walked By Himself' in Rudyard Kipling's Just So Stories. There was something about that cat--aloof and exploitative--that just spoke to me. Possibly because I am a sucker for aloof and exploitative creatures?


I've had many cats. When I was in my early teens we had Jojo, a little grey tabby I rescued from the garden. She loves our dog Andie--it was a mutual love--and whenever Andie was taken on her walk, Jojo would appear and walk underneath her, tail tickling Andie's belly. Then we had Marmalade, who fell out of a tree, and Salt and Pepper, who came home from the shelter sick and didn't make it a week. Then there were Tommy and Tuppence--Tommy was my first ever boycat. Little did I know what was coming! Tuppence had kittens twice, and one of her kittens stayed, Peekaboo I sentimentally named her after a cartoon cat. Then my parents moved house and left Peekaboo behind, and I had no cat for years.
I often dreamt of having cats again. There's nothing more comforting that warm fuzzy purring ball in your lap. I swore to myself that when I lived on my own again I'd get one. But in New York I was scared of laws and what if i left (which I did). I never had a cat friendly flatmate after that, and my life always felt too transitory too. But when, in 2012, I was living on my own in Delhi, I decided it was time. It really was time to stop moaning and pining and to go get me a kitten. And I did.
He was mostly white ('Didi, khargosh jaisa hai!' exclaimed my maid in delight) with orange patches and he was hugely cuddly. We called him Crotchcat because he simply had to always be in a lap. He'd thump into bed at night, ten minutes after the lights went out, like clockwork, and then burrow down into my quilt and purr. I had six glorious months to the soundtrack of that purr, and then one day he just wasn't there any more. I don't know where he went. A friend and a cousin and I patrolled Nilgiri apartments asking children if they'd seen him and rattling his food bowl with Whiskas in it calling for him for a whole week. I like to imagine him in Jahapanah City Forest, king of the jungle, single-handedly decimating Alaknanda's pigeon population.
And I was, once again, catless. Until February 2014, when a little grey fuzzball entered my life. Purring constantly, Jinx, who has now amassed a collection of aliases to rival the CIA, is Kipling's cat. He is the one in charge. He knows arcane secrets, like how to stop 'mow'ing, but he will only share them with me if I pay a price. He will sleep in my bed, if he's cold, and if I dare move then he's gone. He will do as he do do and there's no doing anything about it. He likes some people (he LOVES The Good Thing), and then only one at a time and when he wants them. He will permit me to have parties but will sit atop a lofty perch and judge all of us. He will cuddle, but only one a month and for five minutes. He will eat like he's starving and he will puke, but that doesn't mean I get to cut down his serving size.

But, unlike Kipling's cat or the Rum Tum Tugger, he will come at me screaming when I get home from work, and twine himself around my legs so I nearly trip (every. single. time.). He will play by himself, but I must be awake and cognizant of his existence, so he can pop by and rub against me a bit when he feels like it. I shudder to think of the reception I'll have when I get back from this trip! 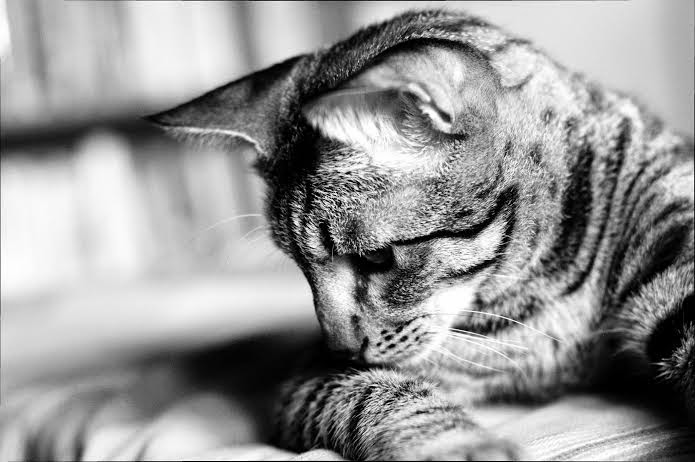 JP brings home the lesson of cats--they are not humans and they are not dogs. They are indeed affectionate and loving, but they don't do it on demand for you when you want it. They are equals who reserve the right to relate to you the way they want to. Yeah, yeah, you want me on your pillow purring but I am going to rub my head in your face instead. Because I love you. Just like you pick me up and squeeze me, because you love me.
And for all the 5am wake up head butts, and the occasional pooping on the sides of the litterbox and dear god the 'mow'ing when I'm in the shower, I cannot imagine my life without my best beloved crankypants clichecat. Who perches on the edge of the litterbox with all four paws and poops like a human. To drive the point home.
(JP's human likes cats, cooking, cold weather and whiskey. She writes at www.50datesindelhi.com.  Follow her on Twitter at @50datesinDelhi)
Posted by eM at 10:48 am