TC Tribute Week: Skuin Who Won Our Hearts And Disappeared

Today's post by a writer I admire very much (and who wrote to tell me about her cat after TC went). Janice Pariat may be a name you're familiar with already (and if you're not, get reading!). This is a story about her cat, Skuin, who was there one day and then not. Some cats just show up and stay as long as we need them. That is the essence of cat.

She came to me a granted wish.

My X-boyfriend and I had visited Friendicoes in the hope of finding a kitten waiting to be homed. “Come back in two-three weeks,” they told us. And we left, empty-handed, disappointed. I hadn’t imagined it would be difficult. (Worse, I hated to wait.)

The next day, at work, a colleague called. “Didn't you say you were looking for a kitten?”
She’d found one abandoned in a suitcase, in a building somewhere in Lajpat Nagar. Mewing crazily.

She was tiny, about a month old, with stripe-spotted grey fur, and the sweetest, saddest black eyes. We fed her on a diet of watery Cerelac, pooled in our palms, from where she’d lap it all up, her tongue pink and rough.

“Skuin,” said X when I asked if he had any names in mind. “No, no,” I protested. I didn't want our cat to be called the Khasi word for ‘cute’. But, as these things do, it stuck. We gave her a cardboard box, X’s softest sweater, a hot water bottle, and she promptly abandoned them all to sleep in the crook of my arm, or under my chin, snuggling into my neck like a small luxury fur scarf. She grew and fattened rapidly, slipping into our lives—as cats tend to do—so easily. While I was at work, X told me, she spent most of her time (as I suspect he did) basking belly up on the bed in the Delhi heat, snoozing. But she always met me at the door. 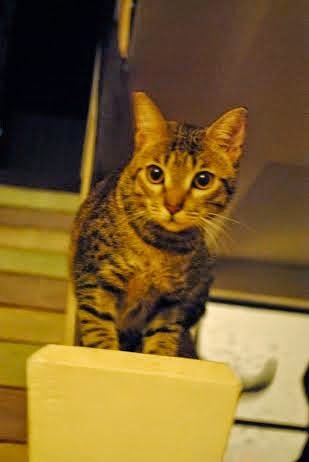 Skuin grew increasingly prettier too—her chest necklaced by three curving stripes, while the spots on her sides darkened, like a little leopard. Oddly enough, she was most intimidated by the world beyond our doorstep; timidly sniffing the outside air and then dashing back inside at the barest hint of ‘danger’. The only time she did venture into the backyard, she was chased and bitten by a terrifyingly huge tom cat. I remember spending hours trying to coax her out of the electricity metre box in which she hid, on all fours, making cajoling noises, calling her name. Only a few days later did we realise that what we thought was a swollen bruise on her hind leg was a pocket of pus. For the next three weeks, we were at Friendicos every morning at eight. The vet would slip a needle through the gash in her skin, and drain the liquid, while she howled. My heart broke every time. But tough as ever, she got better.

At the end of that year, X and I moved back to Shillong, Skuin in tow. It wasn't easy. For those of you who’ve travelled to this part of the world, you know it’s a two and a half hour flight to Guwahati, and then a four-five hour drive up the hills into Shillong. By the time we reached Nongpoh, we let her out of her basket, free to clamber the seats and us (not a good idea, but you try sitting in a car that long with a constantly wailing cat). 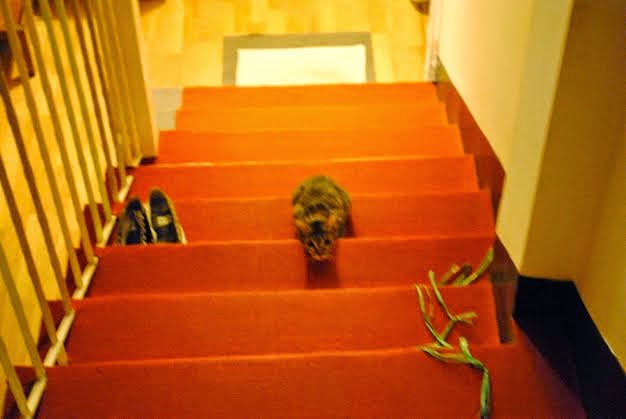 She was ecstatic, to put it mildly, in my parents house. From a relatively tiny flat in Kailash Colony, she now had not one but two floors in which to wreck general chaos. And a long flight of stairs to tear down chased by invisible pursuers. My favourite memory is crumpling paper and throwing it for her to ‘fetch’ (she had the soul of a dog). In the evenings, she’d curl up on my bed, and slowly inch her way under my blanket. X, who lived with his parents about twenty minutes away, would visit, but she felt like my cat now. It was the time I discovered Philip Pullman’s His Dark Materials, and I liked to think of Skuin as my very own daemon. She’d chatter back at me when scolded, snooze on the book print-outs I was editing, follow me to the loo (!), and drape herself over my bookshelf as I worked.

One night, Skuin slipped through an accidentally left open door and never returned. I don’t quite know what prompted her to venture out. A sense of adventure, or sudden curiosity. True, she’d grown far more interested in the outside world in Shillong—sometimes trying to creep out through the window grills. We searched far and wide, and for many, many days. We left out food bowls that I was excited to find empty in the morning, only to discover they’d been finished by a black-and-white stray. It didn't help that we had a pine forest behind our house stretching over several hills. We placed an advert in the local newspaper, stuck “missing” posters all around the colony, received several prank calls (mean), headed out to people’s homes only to find they’d caught the wrong cat.

I guess what I’ll never have is closure. And for months and months after she vanished the not knowing would become too much. “This is worse than her dying,” I’d weep. But now, four years later, I realise that this incompleteness only allows for more imaginings—that she’s free and happy in the forest, running wild, leading a pack of kindred kitties. I will always imagine her alive. 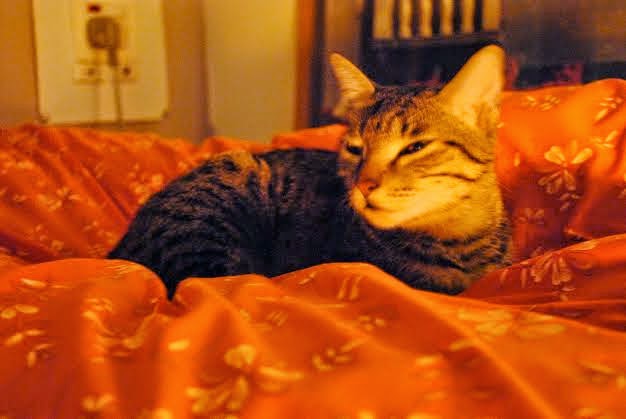 (Janice Pariat is the author of Boats on Land: A Collection of Short Stories, and Seahorse: A Novel. Currently she lives between too many cities to keep pets, but is happy to cat-sit for you. Send her a tweet on @janicepariat)
Posted by eM at 1:37 pm