Do you remember the time?

(This post began as an alternative to a listicle I was doing for POPxo. I do some writing for them, mostly top ten lists and so on, and they had suggested I do one on a male bestie to an accidental boyfriend. I couldn't think of what to say, so I turned it into a story instead, which was useless for them, but I thought I'd share it with you guys instead.) 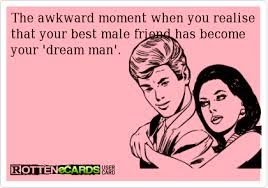 When this post was originally suggested to me, I wasn’t quite sure how to tackle it. I mean, I’ve had boyfriends, but “accidental”? How does that work? Plus, while I enjoy men and their company, I’m a girl’s girl, cultivating my rich, deep friendships with women, more than men, though I have no problem with being “one of the boys” when I have to.

Then I remembered Gaurav (name changed), from all those years ago. I was seventeen, he was a younger fifteen. We met on ICQ—remember ICQ?—where I went by the jaded moniker Sugar Coated Pill, and his handle was [cool rap lyric]. We started talking randomly, you could add anyone you liked on ICQ if you had their “number”, like a BBM pin.

“Fifteen,” I thought to myself, dismissively. What does a fifteen year old know about life? We went to different schools—I was in a large, teeming co-ed, he was in a smaller, more elite boy’s school. We had hardly any chance of running into each other in real life—no common friends, not even in the same neighbourhood, and so I guess it got easier to talk to him online. Every afternoon I’d come home from school and log in, and usually, there he’d be. Waiting. For me.

I had just moved back to Delhi after two years in boarding school, and was finding it sort of hard to make friends this time round. I had fallen in with the popular kids when I first moved, but we didn’t click, so I allowed myself to drift apart from them. I had some new friends who I sort of hung out with, but again, it was a strange, drifting feeling, like we were hanging on to a liferaft, and only talking till the ship came to rescue us and take us home. With Gaurav, I could let go.

The funny thing was, he was nothing like me.  We came from completely different backgrounds and had completely different interests. I was a “good girl” who stayed out of trouble, and loved to read, he was the “bad boy” who never cracked open the spine of a book in his life. It was a strange friendship, but it worked.

It didn’t hurt that he was cute, either. Like 90s boyband cute. Easy smile, floppy hair, charming, the first time we arranged to meet, I took one look at him and thought, “Oh no.” Because it wasn’t easy. We spoke every night on the phone—he was my best friend, and I was his, except, except, I loved him, and he didn’t.

Accidental boyfriend? Yes, and he knew it too. And when the other girls came in, because he was fifteen, then sixteen, then a cute teenage boy in Delhi, and of course there were other girls. I felt him drift away, though always with a backward, apologetic smile, like, “You know this isn’t really me, right?” He even fixed me up with a friend, who I dated for a little while, and then broke up with all of a sudden, leaving him bitter, saying, “You like Gaurav, why don’t you just admit it?”

That’s my story. My accidental boyfriend, who didn’t really know how he tripped and fell. I’m not quite sure either, but it was fun while it lasted. Oh well. RIP Old Relationships.
Posted by eM at 10:50 am

Email ThisBlogThis!Share to TwitterShare to FacebookShare to Pinterest
Filed under Nostalgia, People I meet, Stuff from the past