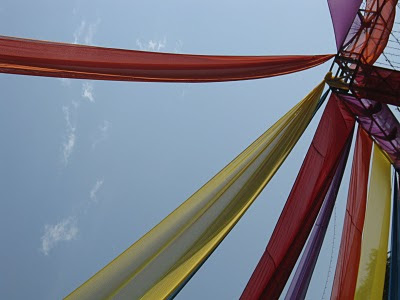 I was in Delhi and Jaipur over the last ten days, and with limited to zero internet access. Of course, I have my beautiful cellphone which made me wonder how I have gotten along without my email sent straight to my cell for all these YEARS, but you can't blog from a cell. I know, coz I tried.

If you follow me on Twitter (and you SHOULD), then you know what I've been up to. If you don't, here's a quick recap.

I was part of a panel called Teen Deviyan, which is apparently a Dev Anand film

, which I didn't know until the day itself (which goes to show how much I know about retro Bollywood). Moderated by (dun dun DA dun) Chetan Bhagat, the other two deviyans were Ira Trivedi

(who was in Kovalam with me, and we're pretty good buddies) and Anjum Hasan (who I hadnt met before, but whose book

I LOVED). I wondered how they had chosen the panel. There's Ira, former model, prolific writer, whose books cover Indian high society and the troubles therein. There's Anjum, with her lyrical, serious prose, the most "literary" of all of us. And then there's me, with my coming-of-age story of a young girl in the urban Indian mileu. Maybe it's because we were all young? Maybe because we all wrote about urban India? Who can say.

Mr B. was in full form. Some people found his questions rather facile, but say what you like about him, the panel was entertaining and amusing. He really did his research too--he was supposed to be only introducing us, originally, but at the last minute, decided to do a moderated session. This worked for me, because I am TERRIFIED of public speaking (no, really). So I read like two paragraphs or something and hoped the mic wasn't picking up on my thumping heart. I was even more nervous because this was like the BIGGEST crowd I had ever read in front of. Of course, they were mostly there for Chetan, but they were going to listen to me, Chetan's fans or not, and I had to say something, not just trip over my own tongue with nervousness.

There were SOME fireworks on stage, but I was blissfully unaware of it all, mostly. Once I finished my part, I sat down and enjoyed myself, watching all the various dynamics at play. Besides, on a completely selfish note, I learnt later that I sold ONE HUNDRED COPIES, which made me walk around for the next two days with a big grin on my face. I love it when people buy the book.

OOOH. I FINALLY met Sidin Vadukut after many years of just about missing each other. I also read his book, Dork, which is really funny and you should read it too.

The much awaited 'Writer's Ball' was meh, not as fun as last year. There were too many people for one thing, so that feeling of exclusivity last year's had was missing. Also, the buffet spread and the several dinner tables made it feel a bit too much like a shaadi for my liking. And the dance floor was sort of tiny. We did have an after party at a friend's GORGEOUS house (funny story, we were at the same house a couple of days earlier, and me and another friend went for a smoke to the garden. "Let's explore!" we said and went for a walk around the grounds*. In the distance, we see a white statue of a woman and as we get closer, I SWEAR it looks like it's moving. "It looks like it's moving!" I squealed and the two of us ran daintily back to the house, holding our wine glasses out in front of us.)

*not an exaggeration. Really "grounds".

We spent a lot of time at Cafe Flow (trying very hard not to make menstrual jokes) which was this coffee shop in the same venue, but unlike everything else, not free refreshments. They made BRILLIANT Bloody Marys for all their crappy food and eventually crappy coffee, so if you're ever in Jaipur craving a perfectly done Mary, that's the place to go. Diggi Palace. Cafe Flow was also sort of the writers-publishers hang out, to get away from the teeming masses, so you could table-hop quite happily.

What else? Well, there was a band called Djaima, which we all found hilarious for two days, making jokes like "Djaima Monologues" and so on. When they actually came on, we (well, mostly me, because I have no shame) whooped and cheered and yelled, "Djaima!" and everyone around us looked bemused at our enthusiasm and then figured they must be a famous band to have such varied groupies.We did our part for the music scene that day.

Well, that was mostly Jaipur for me. I realise I haven't talked about the panels, but I always find READING about panels to be deathly boring as opposed to actually being there, so just imagine that I had a good time there too. The Kala Ghoda festival is next week and I'm really looking forward to that!

PS: For lovely and funny recaps of the ENTIRE festival, please check out this blog.
Posted by eM at 2:12 pm

Email ThisBlogThis!Share to TwitterShare to FacebookShare to Pinterest
Filed under People I meet, The Book, Travelling light