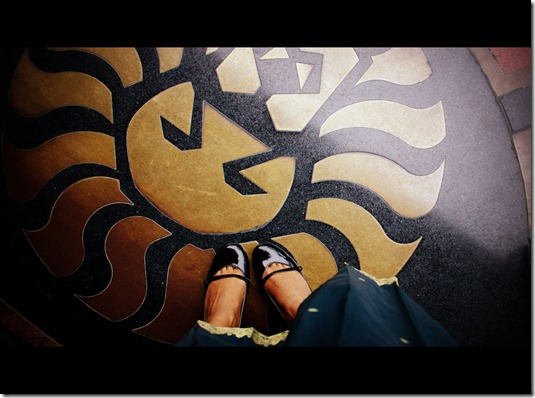 Singapore! City of shops and nightlife (and some excellent food!) I always associate it with sleep deprivation, and this time was no different. The flights to Singapore are always at such anti-social hours, that I left Delhi at midnight and reached at 5 am, which is barely enough time for a full night’s sleep, but also not short enough that you can sleep once you get there. Basically, I always have to hit the ground running (which I did with plenty of coffee.) And don’t even get me started on Air India, and their flight attendants, who look super pissed off if you ask for anything, including a glass of water. And who keep waking you up to feed you, even at two in the morning. Grrrr.

But, I stayed at the most gorgeous boutique hotel called The Club, with all white rooms and an iPod dock, which I was almost inordinately pleased with. The other speakers were Shobhaa De and Mukul Deva, and then, little ol’ me. We were all whisked off to lunch at an Indian place, where I nibbled on some stuff, the sushi craving in me escalating. But you can’t get sushi anywhere now dude, and I began to feel sad, maybe the last time I ate sushi would be the LAST TIME EVER. The things we do to our world.

After which, I got to take a nap, and we went shopping. I couldn’t be in Singapore without hitting at least one mall, and so, I made my way to one and bought some very nice white wedges. Which are so pretty, but also completely rid me of my sense of balance, which meant Saturday night, when I wore them out for the first time, I tripped and fell no less than THREE times. And this is before I had been drinking.

I did some quite fancy things though. I went to a place called Santi for dinner, a “celebrity” restaurant at a place called the Integrated Complex, which is a way of saying ‘casino’ without actually saying ‘casino’. The casino looked very cool, and there was a little balcony before you entered the restaurant where you could look down upon hundreds of people all gambling furiously. Sadly, there were strict ‘No Photography’ signs, so I couldn’t get a picture. The casino is free for tourists but charges Singaporeans 100 dollars to get in, another way of the government to be like your nanny.

Another fancy thing I did was go to the Indian High Commissioner's house for cocktails, and the India House in Singapore is absolutely stunning. All white and wood, with a central koi pond and massive art deco chandeliers. The parties I could throw in that place! I wonder if it’s too late for me to be a diplomat.

The talk itself was quite fun, of course, everyone had come to see Shobhaa De, but I think I won them over when I did a couple of passages from You Are Here, including, but not limited to, Arshi’s first time having sex. I managed to sell ten copies, which is good for a book reading where no one has heard of you before, and the books are priced much much higher than here in India. I also had a photo shoot, which involved shit loads of make up on my face, and me standing around, channeling my inner America’s Next Top Model, and trying to smize.

Friend From Bombay Who Now Lives In Singapore (FFBWNLIS) took me out for a couple of drinks. Friday, we went to a place called Chimes, a sort of gallery of little watering holes, where I drank my (MASSIVELY OVERPRICED) glass of wine and filled him in on all the gossip. Saturday, I went and picked him up after dinner (at a yummy Chinese food stall place called KEK) and we went to Clarke Quay, place of my ruin the last time I visited. This time, I was a little more boring and sedate, we leched at people as we drank (at a nice little bar called Le Noir), tried to figure out which women were ladyboys, and met some other young people, who then assisted me in my quest for the Jaegerbomb (scout! I miss you!) The Red Bull did its work and pretty soon I was all WHEEEEEEEEEEEEEEPARTEEEEEEEEEEEEEEEEEEE but after we hopped to place three, a Latin club called Cuba Libre, I realised I had a flight to catch in like, four hours. So, thanks to stupid Air India and stupid anti social flight times, there was no chance of a repeat on my holiday fling. *sigh*

Anyway. Seeing as this trip was very tightly scheduled (my itinerary left little or no time for a “free period”) and I was mostly hanging out with much older people (the organisers, the other writers) I didn’t have a chance at the wild, let-your-hair-down weekend of last time. But Singapore continues to grow on me, people are friendly and smart, there’s always something to do, and it’s nice, isn’t it, when your job is basically to go around the globe talking about your book?

I did take more pictures, which I will be uploading on my photo blog shortly, so check that out for more amateur photography.
Posted by eM at 2:59 pm