Things I Object To In Louisa May Alcott

Rereading Little Men and I have some thoughts about the March saga.

1) What in the name of ever loving hell does John Brooke die of in Little Men? It's like one day he's walking around all lalalalala and the next day he's dead. Quickly. In The Night. (My theory is murrdeerrrr. Think crossover book called: The Little Men... Of the Night!) 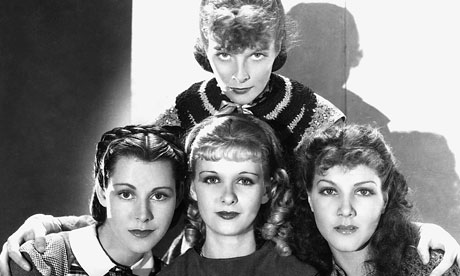 2) While we're on the subject of death row, Beth, it is largely believed, died of TB. Right? But there's no mention! First she goes to feed some sick family, blahblahblahBORING, and then she's never the same again. The characters who preach at you most die first. Novel Rule Of Thumb. (John Brooke was SUPER preachy during Good Wives.)

3) Amy marries Laurie after Jo turns him down. I know you're all with me.

4) Amy is just generally a brat, but I did enjoy/resent her grown up experiences far more than Jo's or Meg's. She got to be the lady and all ladida, and as a fierce Jo lover, I was all like WHAT WHY DOES SHE GET ALL THE GOOD STUFF? (Trip to Europe, I'm looking at you.)


5) Actually I enjoyed Meg a lot. I liked when she got all tarted up at that party at Sallie Moffat's (?), I liked her whole Brooke-romance, I liked her twin babies and her little house. Meg was cool. (This is not an objection, but I wish there was more Meg.)

6) Except in Jo's Boys, when she (SPOILER!) (can you put a spoiler on a 100 year old book? Maybe.) doesn't let Nat marry Daisy because of his background and I'm like bitch please, remember the fuss Aunt March kicked up when you wanted to marry dear departed John?

7) Also Bess Must Never Know Dan Loves Her Because She Is So Pure And White And He Has Lived Among The Indians.

9) What do we really think about Bhaer? He kinda grew on me by the end. No? I mean, still JoLaurie should've happened, no question, but Bhaer could've been a LOT worse.

10) Isn't it weird how everyone names their kids after each other and Meg and John named their kids AFTER THEMSELVES? Daisy was actually Meg III, Marmee being original Meg. Obviously the husbands have no say, because it's all Marches, all the time.

Email ThisBlogThis!Share to TwitterShare to FacebookShare to Pinterest
Filed under Books and reading, Lists