(This was my newsletter the week I returned from the Mountain Echoes Festival in Thimpu, Bhutan. Subscribe here for regular updates in your inbox every weekend.)

Bright and sunny morning after days of waking up to grey skies and rain. Now that I no longer live in Bombay where it rains for days without taking a breath, I've come to appreciate rainy mornings, from the time you're lying under your duvet and looking at the light behind the blinds to see how bright it is, to drinking your coffee while you're watching the clouds move, or just the general ahhhh-how-cozy-I-am feel of being indoors and snug and dry while outside everything is being bathed just for you.

Sorry if you have to commute through it though. Then there's nothing romantic about it at all.

You know where else it was raining? BHUTAN. Where I just returned from. Let me tell you all about it: 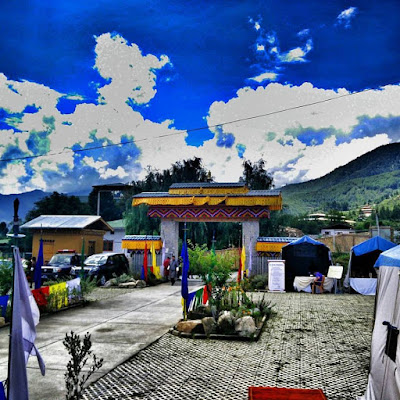 The festival: Mountain Echoes is in its sixth year now, and a pretty major part of Thimpu's social calendar. Of course, Thimpu is "the size of Khan Market" as one writer put it, but still. Bhutanese travelled from all over the country to attend. But it was quite small for all that, so really very intimate, which means most of the talks were pretty well attended. (Unlike other things I've done where there's like five people in the room including the organiser, who is giving you pitying glances.)

My own stuff: My panels were quite fun. I moderated Ira Trivedi and a Bhutanese writer called Monu Tamang in a talk about writing about love, and Monu, though he kept "ma'am"-ing me and being very shy, came out of his shell quite a bit to talk about "night hunting" which is apparently how some traditional Bhutanese men date. (At night. Hunting. But in a consensual manner.) I take full credit for his expounding on Bhutanese sex and dating because of my excellent moderation. (He also said there was no gender disparity in Bhutan at all. I turned to the audience and said, "Raise your hand if you agree with him" and there were crickets. CRICKETS. Later, I met the young Bhutanese girl handling the media for the festival and she was like, "Dude OMG he's so wrong." Paraphrasing of course. Better than India anyway.)

My second panel was a little less lively, probably because we were the second last session to speak to a room full of teens who had been listening to talks about literature all day. However, happy to report, fully sold out of Split, and Cold Feet, my beloved neglected darling, did a brisk trade as well.

The food:  For the first day, I ate whatever Indian food they had organised at the various buffets, feeling very sorry for self, but then I realised I could actually LEAVE and go get something to eat. Huh. Another writer and I set off, and he was already feeling intrepid, so he suggested we eat at a dive bar. We stopped at the least bleak looking one, where the woman got us some beef, chilli and cheese curry, some daal, some rice and some kimchi. She also produced home made pickles from her own tree. Everything was excellent, even an older man pressing his phone into our hands asking us to video chat with all his relatives. (We waved and smiled, smiled and waved.)

That evening, emboldened by my dive bar meal, I ordered some pork momos at our hotel, and because I was in a rush, only managed to eat them much later at night right before I went to bed. Alas! My stomach could not handle this or perhaps the meal from earlier, because I woke up at 4 am with the most agonising stomach cramps and basically got Delhi belly in Thimpu. Thimpu tummy? It was owchy anyway.

Oh, and I ate at Cloud 9, which is this teeny, very fancy establishment known for its burgers and its homemade ice cream. Run by an Australian woman married to a Bhutanese man, it seems like a place everyone would be at, but no locals seemed to know it. Some of my fellow festival goers had every meal there and after one delicious anti-national beef burger, I wished I had thought of it too. I also had gone on a different day and had cold coffee and homemade Rocky Road and mmm. MMMMM.

The drink: Three words: Bhutanese. Peach. Wine. Actually, the local brands were pretty tasty, from the red wine to the Raven vodka to all the whiskey to the beer. (Less posh is the local EXTREMELY potent saunf-based drink which I could not have more than two sips of, even after diluting) I just rolled along with my peach wine, which tastes sweet and desserty but packs quite the punch as you realise later when you're arguing with Famous Writer. *sigh* (Argument totally warranted though.) The festival did most of its after-hours drinking at a small pub called Mojo Park, which had a live stage, exactly ONE bartender who started handing out post-its when he couldn't handle all the orders and all of Thimpu's trendies hanging about outside in the smoking area. What's that you say? Smoking is banned in Bhutan? Um, that brings me to...

The smoke: (Listen ya, sometimes I smoke because it just makes my good times even better, ok. I don't smoke at home very often and I don't do drugs or drink to excess or pop pills so whyyyy can't I just sit with my cigarettes? WHY? Argh. Very conflicted about this as you can tell.) Disclaimer over, I decided to take some cigs to Bhutan, because all the emails were all, "You won't get cigarettes ANYWHERE" etc etc. It was also very exciting because you have to declare even 14 cigarettes (that's how many I had), pay their exact value, and have a permit made. (I forgot all about my permit after I had it made, but no one asked me.) After day 2, several people ran out of cigarettes, but an Intrepid Reporter friend asked some locals where he could buy some and they took him to a shop and he returned with cigarettes. Also I totally saw Kelly Dorji smoking, so he must get from somewhere.

All told, everything was amazing. I wasn't introduced to the Queen Mother, because I skipped her dinner to watch Indian Ocean, for whom I will mostly cancel all my other engagements, but she seemed really lovely from a distance, attending almost all the sessions, and being engaged and asking questions and everything.

And that was Bhutan. Really quickly, here's what I wrote this week: As Aunty Feminist, how it's hard to be religious and feminist at the same time. ** In my relationship column, bad dates **.