Hanging on the wall of my study is a calendar a friend gave me, It features several doctored photographs of cats--like they've all been put through a Snapchat filter, say. Cat with sunglasses, cat with a hat, cat with sjiny bokeh stars around their face. This same friend also gave me an excellent fridge magnet which says "show me your kitties" and still makes me laugh when I look at it. Anyway, the cat calendar is also great because all the boxes for each day of the month are nice and big, so I can fit in my plans without having to squinch my handwriting up. So I've taken to writing down my commitments and from where I sit at my desk, I can see what the week looks like without getting up. (I have to get up to see the specifics of the week though, it's too far away to read in detail.) I used to use Google's calendar app, still do sometimes, but something about the satisfaction of a flesh and blood calendar, and also why give the internet one more thing they know about you right? Already major companies know who my friends are, how I spend my time, what I think about and often, what I do, but they don't have to know where I'm going and who I'm meeting if I choose not to say.

I sometimes think if you're busy socially, you send out a frequency that your other friends can hear as well, and suddenly they start to think about you. "Oh, hmm," they think, "We haven't heard from her in a while, let's make that plan to hang out." And then your calendar is full, and you're dressing up every night, until the next week, when no one has thought of you at all, so you have a week sitting at home in your pajamas reading. Both are great, but this was the former week.

I've also been putting up a lot of photos of my outfits on Instagram (you can follow me here) which is very not-a-fashion-blogger style. I don't go on about where I got my outfits from, but I do go on about how they make me feel. I love clothes, and I love experimenting with style. There was a time when no one would take you seriously as a writer if you dressed up a lot, but those days are thankfully over. I see women at lit fests and parties and conferences wearing really nice things. I see "serious" people talking about lipstick shades and fabric. And I see that when someone says "You look nice" they say it admiringly, not condescendingly.

This week in restaurants: For a long time, Ameya, Niyati and I have been talking about going to Chateau de Pondicherry but the plan just never happened. It became sort of a running joke--a restaurant that was super close to us but one which we would never visit. Finally, we made it happen yesterday, and dudes, maybe we should have left it as a running joke. The cocktails were nice, the restaurant itself is beautiful and the woman serving us who might have also been the owner, was very warm and friendly, but the food, oh, it didn't have much to recommend. Almost everything was undersalted, and was very heavy on one spice or the other (too much pepper, too much basil). We ordered a lot and ate most of it, because we were hungry but it was an eating-because-we're-hungry thing, not a this-is-so-delicious thing.

This week in home comforts: I have rediscovered my love for the watermelon. It's summer time, and that means mango time, but often, we forget about the amazingness of watermelon. So sweet, so cold, like that poem goes. I read this great article on The Goya Journal on how to make watermelon shrub (I kept calling it watermelon FROSH for some reason, but shrub is not much better) and I'm excited to try it. For that, I'm going to get my melons from I Say Organic, which is still the best place in Delhi to buy organic fruits and vegetables. (I also have a great organic shop down the road from us called Roots, which I use frequently for organic sugar, lentils and once a really good pickle as well.)

This week in books: Had a really good haul delivered from Book Chor again recently. Here's a photo I took of it. 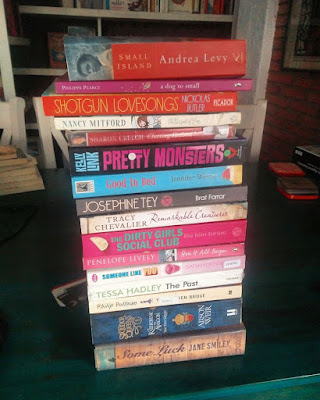 Of these, so far I have read:

1) Good In Bed which is hilarious, but then I got the sequel on my Kindle and it was terrible, so if you read it and are similarly tempted: DON'T.
2) The Broken Bridge which was nice, but I judge all of Pullman through His Dark Materials and this was not that.
3) Pretty Monsters which was AMAZING, one of the best books I have read all year, a fantasy-meets-horror-meets-humour collection of short stories. I am now on a mission to read all of Kelly Link's books.
4) A Dog So Small which was also very similar to the author Phillipa Pearce's other book Tom's Midnight Garden which is one of the best books I've read about being in a time slip, whether for adults or children. Similar as in, there's also a boy who yearns for something (in this case a dog) so much that he tunes out of his regular life completely, and so, worries his family.
5) Katherine of Aragon which I am currently reading. Have read all of Phillipa Gregory on the subject of Tudors and now I am branching out. Why does Henry VIII fascinate me so? Is it the wives? Is it the cruelty? I think it's both those things, he turns into a Bluebeard-esque character, ominous, laughing and handsome until he wasn't.

Stuff I read on the web this week

As someone who is interested in the Royal Wedding this weekend but also not THAT interested, here are two articles on the subject that made me go hmmm.


The incredible Margo Jefferson on Megan Markle and whether her arrival indicates a wind of change.

Excerpt: But is Markle automatically marrying up by marrying a prince? In the old school way, yes: any “commoner” who marries into any royal family is seen as marrying up. But Harry is marrying up too. He’s marrying up by marrying out – out of long-entwined bloodlines, out of entrenched rituals and hierarchies, out of a lineage as constricted as it is privileged. We always ascribe social ambitions to commoners, but aristocrats have their own longings for a world elsewhere. Harry is marrying into all the possibilities of postmodernity. It’s a world where – as Zora Neale Hurston said of black folktales and music – hierarchies, styles, sites of social and cultural change are being made and forgotten every day.

And if you're ever invited to a royal wedding, here are some dos and don'ts (which are disturbingly almost entirely aimed at women.)

Do not shake the Queen's hand unless she holds her hand out first to shake your hand.

Do not speak to the Queen unless she speaks to you first.

If the Queen addresses you first, answer her ending your first response with ‘Your Majesty.’ End your second response with ‘Ma'am’ to rhyme with ‘jam.’”

An oldie but a goodie: trying to find the end of an endless appetiser promo.

Excerpt: 1:30 p.m. I goddamn hate these fucking mozzarella sticks. The more of them I eat, the more I feel like I can taste every ingredient. Ingredients include: cardboard left in a hamster cage in the sun; acid.

A lovely essay which feels very relevant to me: on birds, cats and children. (Except: I like children unlike the author of this piece. My feelings are like that old saying about New York: a nice place to visit but I wouldn't want to live there.)

Excerpt: Dorian [the cat] and the songbird nestlings were both completely dependent on me for their survival, as a newborn infant would be. The overbearing affection I poured onto Dorian would have drowned or smothered a child, while the stoicism I cultivated with the birds was only appropriate for a mother who planned to die young, leaving her children to fend for themselves. Motherhood, not marriage, was the one “till death do us part” relationship among humans. A mother would have to navigate between the urge to protect and the need to respect her child’s autonomy even after the child had left home to study, work, or marry. I knew how to hold on and how to let go, but I couldn’t imagine having to do a little of both, in the right mixture for each occasion, day after day for the many decades that make up the average span of a mother-child relationship. And in order to love my own child in spite of my general dislike of children, I would have to think of him or her as an entirely different category of being: for example, a cat. That’s what I was trying to say when people refused to accept my decision not to have children. I could only become a mother if Dorian could be my child—that is to say, never.

On falling in love with a polyamorous man, which okay, has been done, but the author is from Mumbai which is why I found this piece interesting.

Excerpt: She has suggested the meeting. I have heard enough about her to know I’d like her. Cory says she feels the same. Well, maybe if we met in a slightly different situation though? I’m so nervous. We meet for xiao long bao – Shanghainese soup dumplings. Cory texts me when I’m on my way there to tell me I can sit on his side of the table. This is actually one among a few things I’ve been stressing about. I don’t want to end up on one side alone while they sit across from me, like it’s an interrogation. This text calms me down a bit. So does his hug when I meet him outside the restaurant door.


This one guy had done a terribly tone deaf piece on why women succeed in publishing. (I believe one of his arguments was: because they already know how to juggle children and in laws.) Urvashi Butalia is having NONE OF IT.

Excerpt: In feminist circles, and sometimes even out of them, when women talk together we often find ourselves saying, resignedly, that when speaking about women, even the best of men will at some point, reveal the deep biases they carry inside them. We recognise these with a sense of familiarity, we’ve met them all our lives, but every time we encounter them – as in Venkatachalapathy’s piece – there’s also a sense of disappointment, almost of despair. We’re in the 21st century and we still have to deal with this?