(Missed a week, but do you want to never miss a week again? Sign up here!)

Can you believe it has been TWO years of this email in your inbox every week, give or take? CUR-AZEEE! That is 104 emails, which doesn't sound like a lot now that I look at it, but still, you know me one hundred times more than you normally would. Um. I'm hoping that's a bonus.

Now, if I was an organised sort of person, I'd have tied up with some brands, gotten you some discounts, but alas, I am me, and I have nothing for you, except my Zomato Gold referral code? You get 20% off the total, I get an extra month, SO, win win for everyone, if you want Zomato Gold that is. I was resistant, but then I went with two friends to Arriba last night, and because two of us had Zomato Gold, we got four free drinks (2+2 on alcohol) which is pretty good. I calculated that for 800 rupees (which is how much it cost for a 3 month membership) I would be getting MORE value for money than if I just paid normally. The referral code is MEEN6056 anyway if you want to use it. (I was not paid by Zomato for this product placement, I promise.) (I wish!)

Arriba was really good though, they must have hired a new chef or improved upon the original, because while I remember the food being nice, it was never "oh my god let me put it all into my mouth immediately" which is what happened yesterday. Plus their margaritas! I regret them today as I am snoozy at 7 pm, but so worth it.

But happy anniversary to us, my darlings! Here is a link to last year's first anniversary edition and the very first newsletter I sent out. How we've evolved since then.

This week in self indulgences: I know, I know, cold brew coffee is a bit of a scam, especially when they sell it to you at fancy coffee shops and charge you like 250 bucks for it, and we fall for it every time! Because it just sounds so nice: coldddd brewwww. Decadent. Like something rich and caramel-y to roll around your mouth, and god, now I just want an Alpenliebe. (Huh. Just figured out why they called it an Alpenliebe as well. Love for the mountains! Because those weird caramel sweets were supposed to be from the Alps? Fun fact: the same company also makes Chupa Chups and Mentos. Fun fact two: The Mentos company also owns Babol gum.) What was I saying? Oh yes, cold brew. Now the science to cold brew is easy but time consuming: you put about five tablespoons of coffee in 750 ml of water and let it soak overnight, the next morning you strain into a bottle, pop into the fridge, and ta-dah, cold brew. I love it personally, but the measuring the coffee was just one extra thing I did not want to do, so I went ahead and bought cold brew bags, which are basically tea bags with coffee in them from Devan's. Devan's is fantastic for coffee by the way, and they home deliver.  I could, I could in theory just make my own cold brew WITHOUT a tea bag, but it's so much NICER the way Devan's has done it so yes, it's not cheap, but it's cheaper than a coffee shop.

I also bought myself a bulletin board for my study. I don't know what I was imagining: lists of words and invitations to parties and postcards from friends and other exciting things? But I have no paper things any more! And one can't very well pin a Whatsapp message to one's board, so I am left with: two cards from our wedding, both very beautiful, one postcard from the Reina Sofia (Picasso's The Three Dancers resonated with me more deeply than the Guernica, picture below) and an invitation to the book launch of You Are Here, August 22nd, 2008 back in the day when a book party was a Brand New Thing. (More on You Are Here in a future edition of this newsletter.) 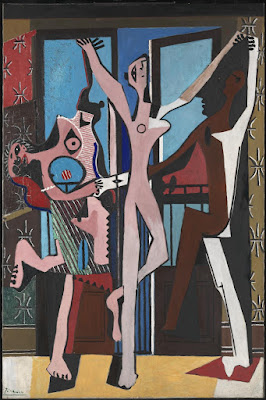 This week in Delhi is essentially the beating heart of me: A friend is moving to a new house and we went out for lunch nearby and then sat in the empty apartment for a bit, the way you do before furniture moves in and it becomes a proper house again. That empty apartment feeling: even though we're all in our thirties and have done this for a decade or more, it still feels like you're getting away with something, you know? Like you have a clubhouse, away from the grown ups. It's a house before it becomes your home, but you're already feeling a little possessive about it, you're thinking, "This is where I'll put my coffee table and that's what colour the curtains will be" but everything is like a new page. I remember sitting in our current house just before it was broken down and renovated, just to check it out one last time, and we sat on the floor and planned what walls would come down, and talked about the neighbourhood, soon to be ours, but then still so alien. As much as I love coming home to a space that has fit so comfortably around us, I also like that new jeans feeling of a new house, particularly the first morning you wake up, the smell of new paint still in your nose, wondering where you are for a second before you realise, "Oh, I'm home."

And then driving home, I told my friend that I probably had memories littered all over Delhi. It's true, I could probably give you an association with most places. Here's where we drank test tube shots that one night and this guy came up to us and said hi, and would you believe he is still in our life almost twenty years later? Here's where we adopted Bruno and Olga, here's where I learned how to drive properly, here's where my car broke down that one time in the middle of traffic and this cop helped me push it to the side of the road and then waited with me till the mechanic came. Oh Delhi, you polluted, sentimental, tree lined BEAST.

This week in AND THEN THERE ARE THE DELHIITES: ARGH WHY ARE PEOPLE LIKE THIS ABOUT THEIR PARKING SPOTS? Is the world going to end, my good chap, if another car is in your spot for five minutes? Okay, I admit, I have drunk the Kool Aid, I too am all beating my chest and Hulk-like about protecting my parking space, but my reasons are more laziness than protectiveness beCAUSE if someone is in my spot and then I park in someone else's space then I will have to climb up and down four flights of stairs AGAIN to repark once whoever it is has gone. But if there's someone in our spot and then there's also a space next to it, I just go into that space. IT IS THAT SIMPLE, DELHI! Okay, all this because this friend came over to play Catan (expansion pack! Great fun and I also won which means it was even more great fun. The greatest) and he parked in the neighbour's spot and so the neighbours, instead of moving one down, as is a normal human reaction, decided to park in front of his car, so when this guy had to leave, he couldn't, so he had to call a cab and come back the next day and it was all very pointless.


At least we are only passive aggressive in this area. Other parts of Delhi are worse, here are recent examples: 1) a WHOLE METRO LINE was held up because two people got into a fight over parking. 2) One brother refuses to move his Audi, everyone stabbed.

Let's just agree everyone is crazy especially about where they put their cars and move on.

This week in stuff I loved on the internet (only two links because slow news week):

Excerpt: What makes the Ragdoll cat different from other cats is a matter of temperament. Stripped of a desire for hunting, the Ragdoll has a languid, friendly personality. It is large and less agile than other cats, and has a regal feline elegance: its fur is silky, and long; it has piercing, ocean-blue eyes; and its personality could be called dog-like. This is a cat that greets you at the door and follows you from room to room, providing something like unconditional love.

The best con story you'll read this year. I had linked to another story about Anna Delvey before, how she took this journalist for a ride, and here is a deep dive into the woman. Basically, if you distract people with enough hard cash, they won't look too closely at how you're paying for stuff.

Excerpt: Soon, Anna was everywhere too. “She managed to be in all the sort of right places,” recalled one acquaintance who met Anna in 2015 at a party thrown by a start-up mogul in Berlin. “She was wearing really fancy clothing” — Balenciaga, or maybe Alaïa — “and someone mentioned that she flew in on a private jet.” It was unclear where exactly Anna came from — she told people she was from Cologne, but her German wasn’t very good — or what the source of her wealth was. But that wasn’t unusual. “There are so many trust-fund kids running around,” said Saleh. “Everyone is your best friend, and you don’t know a thing about anyone.”