(A version of this appeared in Scroll, a long time ago)
(Photos also by me)


Chulbul yawns delicately and blinks his eyes—one blue and one amber. He's so bored of all this, even the medal wrapped around his neck is not enough of a plaything to distract him. His owner Shyampriya picks him off the top of the cage and hands him round to the crowd of people who are gazing at him, making “awww” noises. “He's for sale,” she says, and then gestures to the pile of kittens—Chulbul's siblings—inside the cage. “They're for sale too.” She's just explaining to me that Chulbul's mother, Gravy (an Indian street cat not at the show because she's too aggressive) won a beauty contest where she wore a dress (I take a moment to imagine this in my head) and his father is a purebred Persian sitting in the cage next to his offspring, when the MC announces the kitten class. Chulbul has already won a small medal for “Most Playful,” but there are other cups to be won, and Shyampriya has a whole cage full of kittens. 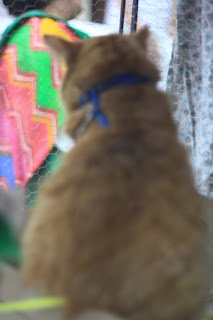 The International Cat Show of India is not a new phenomenon. Maybe not as popular as the Indian Kennel Club shows, but nevertheless in its seventh year now. This is the first year it has been hosted in Delhi (previous editions have been in Mumbai and Bengaluru), and as a cat owner myself, I'm feeling birthday-ish as I skip up the stairs of the Vishwa Yuvak Kendra in Chanakyapuri where it's being held. I'm even dressed the part—small golden cat heads dangle from my ears, my tights feature pixellated cat versions of Batman and the Joker. I almost wore a shirt with Mrs Cat embroidered on the breast pocket but rejected that as too much. “It doesn't look very full,” says my partner, K, to me, looking sceptical. I'm too excited to be brought down, and when a car rolls up next to me asking for directions to the cat show, I wave and point at the building like I'm signalling to a plane. “See?” I say to K, “There are probably loads of people already here.”

There aren't. The place wears the deserted look of a birthday party where a lot more guests were supposed to show up. Outside, there are stalls featuring the sponsor cat food as well as a very well groomed toy poodle advertising her owner's pet grooming salon. Inside the hall—thankfully air conditioned—the volunteers are handing out cat cages: an iron frame work with a very thin stretch of chicken wire to cover it. Surprisingly, even though I brace myself, there is no acrid smell of cat urine (which, once burnt into your nasal glands, never fully leaves). The hall is also almost completely silent. 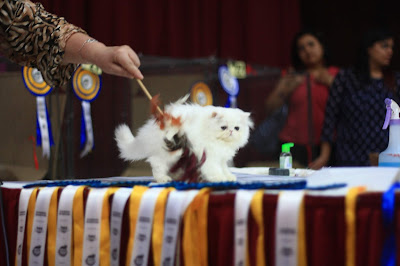 I'm not sure why, but most people who have a “breed” cat in India, gravitate towards the Persian. Perhaps it's because the Persian with it's punched nose face and grumpy expression has made it to a lot of cinema, perhaps because they're docile, or perhaps just because everyone else has one. Whatever the case may be, the hall is almost 90% Persian (including kittens and mix breeds) with one or two stand outs, like a family of Bengal cats (which look like a tabby crossed with a wildcat) or a Siberian kitten. Most people I talk to say the Persian they're gazing at lovingly is their first cat. “Just like a dog,” says one of the owners, stroking her powder puff Persian kitten, Lola. Lola went on to win third place in the kitten category, and I get to hold her while the owner is off somewhere, and for several blissful moments, I want to replace all my three Indian cats with soft cloud-like kittens like this one, who submit to being held. Until I let her go and spit out a hairball's worth of white fur.

Mostly everyone is also an amateur, except for Deepika Kaur. She's showing the aforementioned Siberian kitten, who looks straight out of a cat food advertisement. Kit Kat may be young, but he's already won seven cups in Bangalore, which Kaur has propped up on top of his cage, along with plastic flower barrettes to make it look prettier. She started with importing two Siberian cats, and Kit Kat is now third generation. While we wait for the judge to make her decision, she whips out her iPhone and shows me photos of Kit Kat's relatives, all prize winners. Kaur has come specially from Bangalore for this, and is with a friend, Lola's owner, to whom she gives tips. “Don't fluff her up,” she tells her friend, “They'll just run their fingers through her fur and make it sit down again.” There's this ointment called Goop which international cat showers use to make their felines look extra groomed and soft, but Kaur says the judges see through that instantly. “I thought the show was tomorrow, otherwise I would have bathed her,” says Lola's owner, glumly. 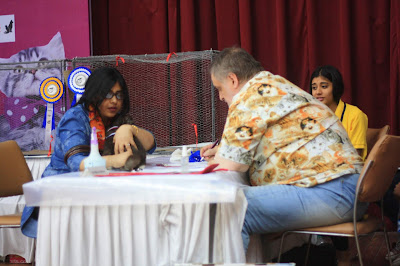 Cat people, I decide after a while, are very nice. There's this whole myth about the “crazy cat lady,” a spinster with a hundred cats, who take over her home and her life, but as the species gets more popular (the most popular pet in the United States), cat owners are becoming more mainstream as well. While the show has mainly women with their kitties, there are not an insignificant number of men as well. In my own personal life, I am the administrator of a cat group on Facebook with engagement rates that would make other more mainstream groups envious, and work closely with a cat adoption group called Everything Meow. Some of the women who run Everything Meow are at the show, and we greet each other warmly, asking after each other's pets. “You should have brought yours,” one says to me, “We could have all watched him while you wandered about taking notes.” Cat owners may be considered more selfish and less social than dog owners, but there's a sense of owning an underdog (apologies: undercat) pet, that makes us all hail-fellow-well-met and we're-in-the-same-boat.

After a while of watching Persian after Persian be presented by the judge, who is using a mic to explain what to look for, I'm thinking about breeding in general. As someone who has Indian cats or “desi billis” as the Whiskas representative calls them, I'm against breeding as a whole. For one, it's a bit like playing God, getting exactly the kind of creature you want, and the kind of creature everyone at this show seems to want is a upturned nose, deep inserted eyes face with enough fur that most of them resemble alpacas. Some of the cats don't even look very well under all their fur, and some are being displayed by unethical breeders, who use the cats as kitten machines. Not surprising because a Persian kitten goes for anywhere between Rs 8000 to Rs 35,000. Unlike dogs, cats are bred not for their service (although there are some character traits unique to a breed: Persians are docile, Siamese are talkative, British Blues are easily trained ,etc.) but for their looks. Which seems to someone like me, an Indian Cat Advocate, as such a waste, when local cats all over the world are prettier and hardier than their fluffy counterparts. 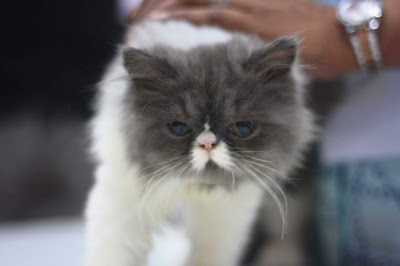 As a counterpoint, organisations like the World Cat Federation argue that without breeding, the best traits would go extinct. On the WCF website, there are a list of rules about showing a Persian with a list of faults that includes difficulty breathing and too flat a skull. With extreme breeding becoming a habit almost for dog and cat breeders around the world, it's good that these points are specified so that the animals, but not so good that the punch-nosed Persian (who needs an elevated bowl in order to eat without smothering itself and can't be flown in an aeroplane because of their breathing difficulties) is being encouraged as a breed in itself. Irina Sadovnikova, one of the international judges at the competition, was one of the breeding advocates. Even as she held up an Indian cat called Sandy (entered in the neutered section) she said it was a pity that this cat had been neutered because otherwise she could have been bred and an excellent kind of Indian breed could have emerged. This goes against everything animal advocates preach. 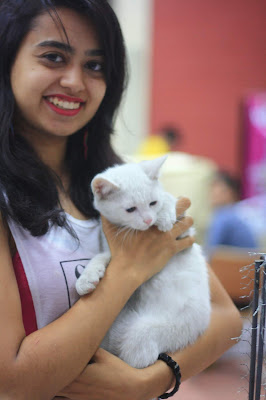 But shows like the International Cat Show of India would not exist without cat breeds. Of all the cats there, only two were of domestic origin (something that made me wish I had brought one of mine—a large black tom cat, who is very handsome, even if I do say so myself) and one of the “desi billis” is a long furred ginger anomaly who is immediately classified into “Persian mix” despite his owner's protests that he was born of street cats who she knows intimately. In the end, the breed cats win, including, to no one's surprise, little Kit Kat, who takes off with first place in the kitten section. All is not lost though, because a prize also goes to the eleven-year-old Sandy, the Indian cat, whose pretty little face makes someone ask me what breed she is. “A desi one,” I say, proudly. She may be only a contestant in the neutered section now, but maybe in a few years there will be shows for indigenous breeds like ours—feral cats and dogs who have converted to a life of domesticity and who—despite having regular pointed faces and short hair—are recognised for their beauty and charm.
Posted by eM at 12:05 pm

Email ThisBlogThis!Share to TwitterShare to FacebookShare to Pinterest
Filed under Crazy Cat Lady, Other genres, The Intrepid Reporter