* Every night was happy hour in the streets of Hoi An's Old Town. Women—and it was always women with the exception of a few places—called out to us. “Buy-one-get-one-free,” they said, standing in front of bars called things like Mr Bean and Funky Monkey (complete with a picture of a sad lab animal expressioned baby rhesus monkey). I wondered about the men, there were young men everywhere, sure, but I saw no one who looked above the age of 40. Where have all the middle-aged men gone? So exceptional was this lack of men that I made a point to notice the one middle aged man I met, a shopkeeper selling me a knock-off Superdry backpack in Hanoi. I took note of his greying hair, his portly dad bod, his wedding ring, and realised it was the first time I had been served by a man of his years in three weeks. In Ninh Binh, we took a three hour boat ride around the rock formations and flooded caves, and each and every boat was rowed by a tiny woman, often much older than us, all wrapped up with a conical hat on her head. Where are your men, Vietnam? And why aren't they working as hard as the women do?

* Next to the Acacia hotel was a little bar, and since the happy hour in the centre of town got a little overwhelming—all that music, so many different choruses of Havana-ooh-na-na, so many drunk white tourists stumbling about—we stopped off there, even if it was a little inland. An Australian man ran it, almost completely deaf, we found out later, and his sole employee, a charming (young) Vietnamese man who poured out our drinks and smiled at us and told us which village to drive our scooter to the next day if we wanted to go for a long ride. I asked for something local and he pulled out three varieties of rice spirits, infused with jackfruit, pepper, coconut and honey/ginger. I had the pepper over ice, which was spicy and lit up my mouth like I was drinking a neat whiskey. A German man who had been in Hoi An for four months and counting appeared to make conversation with us. An English man who was drunkenly shouting at people passing by yelled at us, “Yay for inter-country marriages! Got a Vietnamese wife and kids at home!” I wondered if we looked the same to him, me and K, our marriage of equals, to this old sloppy-drunk man, and what I assumed would be his much younger wife. I wondered if I was being fair, assuming that only on the basis of watching old white guys with young Vietnamese/Thai women across the two countries. Assumptions, as we know, are ass-making.

* We parked in the Old Town and came back from lunch to find our scooter gone. Everyone laughed when we told them and directed us to the police station. Well, actually, they didn't quite say, “Go to the police station” that was just us asking for directions. There's only so much you can convey with sign language. One police station was on the outskirts of town, a large government building which was completely abandoned. We walked through the corridor, poking our heads into each room until we finally found two officers, bent over paperwork. They looked surprised to see us, but were courteous, despite our limited communication. They drew us a map to the other police station we had to go to, the traffic guys, where once again, everyone was on a tea break, but there was one (English-speaking!) cop there who told us to check with one of the big parking lots and not pay any more than 10,000 dong for parking. (The currency in Vietnam is so devalued that everything is in the multiple of 10,000, which makes for some confusing currency conversion, but eventually you get the hang of it.) K parked me at a coffee shop eventually, my short legs were tired, my brain was whiny, sometimes my body is just like a toddler's, and went off on an epic journey to find the right parking guy, who demanded 100,000 dong. Back and forth they went, until K finally agreed on 20,000, thanks to the friendly policeman. This was not the last of our scooter misadventures.

* The second of our Scooter Misadventures happened in the gorgeous town of Ninh Binh. Ninh Binh is where all the travellers “in the know” go instead of Halong Bay, which is the Vietnam you've probably seen photographed, huge rock formations in the middle of the ocean. But because of its popularity, Halong Bay is overrun with houseboats for day trips and night trips, and that's all there is to do there, go on a boat in the ocean. In Ninh Binh, called the “inland Halong Bay” the boat rides are shorter—three hours vs a whole day—and go through a series of underwater caves, which are very cool. (You can choose from four routes, a very popular one is the route that goes to the area where Kong: Skull Island was shot, but since we hadn't seen the movie, we chose the caves.) Anyway, also in Ninh Binh, driving about, our scooter's battery died, and we were stuck on a very remote village road, not a shop or anything around us, except for one house. Out of that house came a man eventually, and he waved his hands about and so did we, and finally, I pulled out the Google translate app (which is AMAZING), and wrote: “can you help us” on it, translated to Vietnamese and held it out. He held up his hand, whipped out his own Google translate app and wrote, “You have to get gasoline.” Through this back and forth, we established that K would ride with him, two kilometres away to get the petrol and I would stay in his house, across the table from his elderly parents. They looked surprised to see me when I walked in and sat across from them, but his father began to pour me lots of teeny cups of green tea and when he realised I did not speak Vietnamese, began to shout all his questions to me in the hope that I was just deaf, not an idiot. We nodded and smiled at each other, Father gave up and went back to his TV, I looked at my phone, and then the grandkids came in, and K came back, and I went outside with the kids and the grandma and showed them pictures of the cats on my phone and they laughed and said, “Meo!” which was the one Vietnamese word I knew (cat!), so I also said, “Meo!” and we had a grand old time saying, “Meo.” I ran out of cat photos so I tried to pull out a dog photo, but they were not that interested in the dogs. Oh well.

(The rest of the story is less interesting, we went to the mechanic, the battery was dead, we had left the scooter rental guy's number back in the hotel, so I Googled “scooter rental Ninh Binh,” we came across a number where the owner spoke English, and she knew who we were talking about and gave us his number. Phew.) 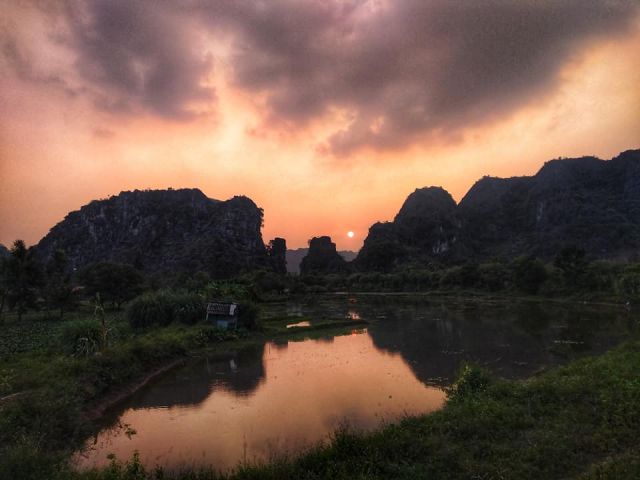 * Hanoi was amazing. I had an old acquaintance there from Bombay, and she took us to a speakeasy bar which she made me promise not to write about, so I won't, but it was amazing. We also went to Binh Minh Jazz Club, which is very popular and in the Lonely Planet, so I'm not ruining anything, but they have live jazz every night, which is very good by any standards, and nice wine for the first time on our long trip, so that was great fun. Hanoi isn't a very late night city, except for these random coffee shops which stay open till about 1 or 2 in the morning, everyone either super caffeinated or huffing on nitrous oxide from “happy balloons” which are a big thing all across Vietnam. (I did not try any.)

* It was also in Hanoi that we found board games—we bought five Chinese knock-offs of popular board games at a little shop we stumbled across. It started raining really hard the second time we want back (to buy more) (a game that costs 4500 on Amazon in India was 1200 there and so on), so we asked the shop clerks if they wanted to play a game while we waited, and made some new friends. The other instance was going to this board game cafe where the walls were lined with games, and they showed us how to play Splendor, which has turned into one of my favourite games of all time, and which, yes, we brought home with us. 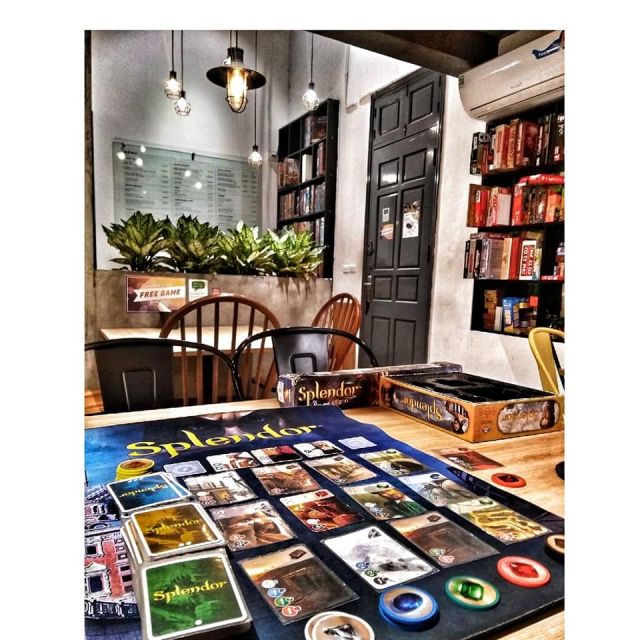 * When we got to Bangkok, K fell ill with the flu, but not before we spent a day in the clothes mall, five floors of cheap clothes, overwhelming even for an avid Sarojini Nagar-er like me. We also made our way to the Bangkok Foreign Correspondent's Club, in the penthouse of a building (the Lonely Planet said we could go!), which was great fun, just for the people watching, and sitting in one corner of the oak panelled bar. Definitely fancier than the FCC in Delhi. OH AND WE WENT TO A CAT CAFE! Which was so fun, but all the cats were definitely dopier than our fellows back home, which meant they were happy to cuddle, but they seemed not very... cat-like? Drugged like the tigers or just inbred, do you think? 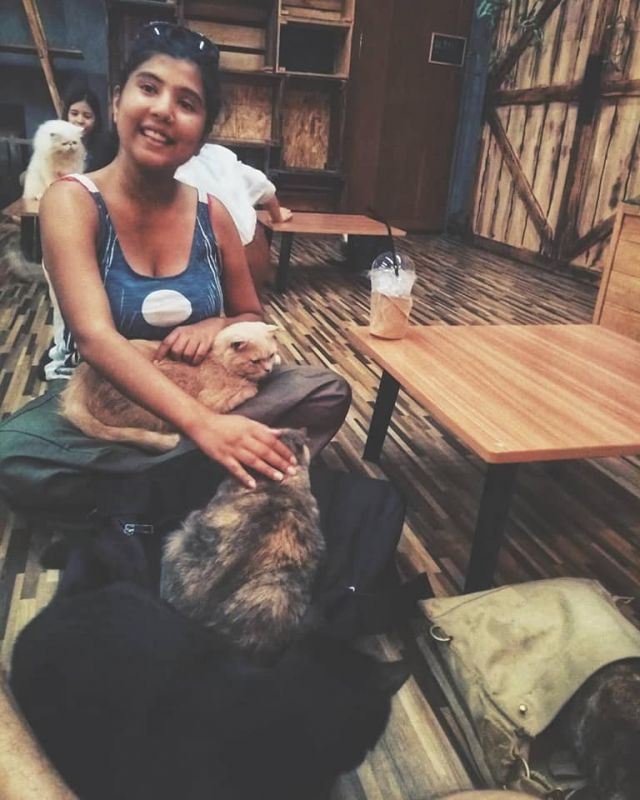