(Yes, this was a newsletter I sent, but this is also my travelogue from our massive Vietnam trip last year. Read if you haven't already, or hey, re-read for shits and giggles.)

“Where you from?” asked everyone. If I didn't answer immediately, they made it into a longer question: “where you fro-hom?” I said, “India” and to my surprise, some people looked confused. India! Your biggest neighbour! (China-Schmina.) It was only in Hanoi that I realised that the Vietnamese word for India is “An Do” which doesn't sound anything like the crisp short “India” that I use when I'm travelling. Do we all have a travelling accent? Mine gets slower, more enunciated, like I'm meeting the Queen or something. “Pardon me, but do you happen to have the time?” (Not quite that bad.) However, a few days in Saigon, and I was sign languaging with the best. I waved my arms around to gesture “big,” I scissored my pointer and middle finger to indicate “walking.” I became, in short, a French person. (“Zis is 'ow you say, a leetle worn no? Maybe you give me a bettair praaice.”)

Another reason I was culturally confusing though, was because K is a tall, European-ish person. Most often, the answer to the “where you from” question would be met with some head scratching. “You're from India, okay, I get it, but this tall person with the facial hair?” Then he'd say, “Germany” and the relief was palpable. “OF COURSE! HE'S GERMAN! IT ALL MAKES SENSE NOW!”

In Hoi An, we sat in an empty soup shop and the little old ladies who ran it watched a Hindi TV serial over my head, full of fair, big eyed people, dressed in full Bollywood, and I waved my hands around, “IT ME!” but they just nodded and smiled politely, and shot, “Ignore the crazy lady” looks at each other. Indians are confusing though, ethnically speaking, don't you think? Not everyone “matches” each other, and unless you move in a crowd, it's hard to tell exactly where we're from. It's sort of nice, being confusing, I like answering where-you-from questions, I like that not many people guessed. I felt like an International Woman of Mystery for a bit there.

At the Cu Chi Tunnels back near Saigon, our one and only guided tour experience, we met a group of single travellers from the same hostel—a Dane, a Taiwanese and an Indonesian. They stood by, amused, when I went into the tunnel and immediately retreated out again, pushing past the line of people that had formed behind me in my panic. The tunnels were basically an underground network for guerilla warfare, and it's pretty neat how they're done, but they are very small and dark. The Cu Chi tourism board has put in electric lights, so it's not pitch black, but there's an underground earthy smell and the walls are thick, and you have to drop to your haunches and squat-crawl through them (our thighs hurt for three days afterwards.) I don't think I'm so much claustrophobic as I am prone to very sharp and vivid flights of imagination. This time, I was wondering to myself casually, “Oh, what would this be like if I were claustrophobic?” and boom. Panic. Plus like the crowds pressing in behind you etc. Also I misheard the guide. He said there were two routes: 40 metres and 20 metres, and I thought that meant the caves went down 40 m or 20 m, not the distance travelled, you know? I didn't want to go further underground! But I finally crawled my way through, and was very pleased when it ended swiftly. It's quite something, plus there's all sorts of War Things that people into War Things will be pleased about, examples of bamboo traps for instance, or holes where bombs fell into. And if you feel like playing soldier-soldier, there are real guns to shoot at a firing range including an AK 47 and so on. (You have to buy five bullets at a time, and you can't share.) (Guns are LOUD. I retreated to a far corner of the rest stop and ate an ice cream instead.)

***
After a few days of hectic tourism (and dodging scooters), K decided to find some more “hipstery” areas of Saigon. We didn't get super far, but we did manage to make it to this old building with an empty lift shaft and four floors that mixed little boutiques and coffee shops with actual homes. We wandered all the way up to the top, and sat at a little cafe called Mockingbird, empty except for two Germans with a Lonely Planet (so much for hipster), and recovered there. 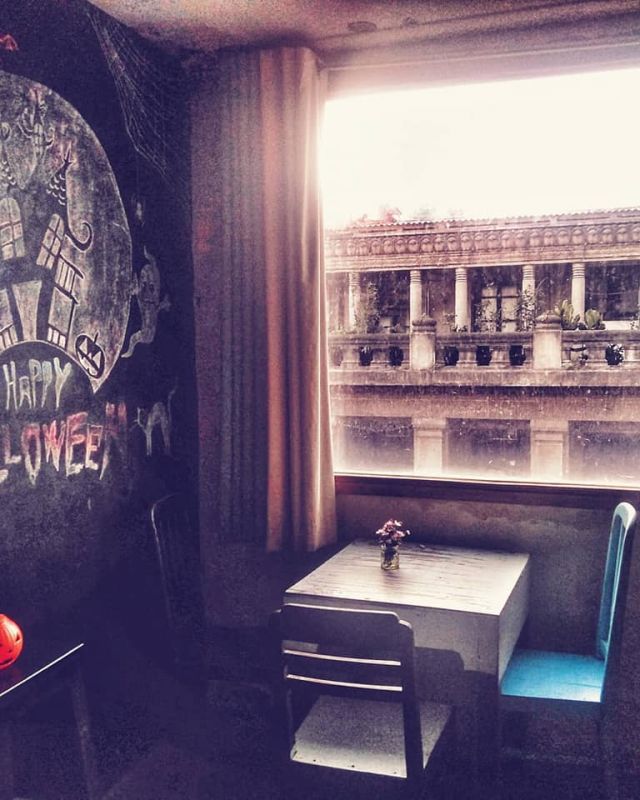 Why recovered? The night before, we had actually met up with two of the three people we saw at the Cu Chi Tunnels tour, completely serendipitously. My cousin's wife introduced me on Facebook to a friend of hers who lived in Saigon, so he took us out to eat a large seafood meal, heavy on the snails. (Interesting, but I think I prefer more mainstream seafood myself.) After which, I asked him to take us to a nice dive bar, and he picked a roadside place, unnamed on Google Maps, but where they made their own rum. “It's very mild,” he kept saying, so we ordered like five bottles of the stuff, while he made his farewells sensibly by midnight, and we kept going, drinking that “very mild” rum. (The next morning, oh god.)

This friend had the cutest dog, who he brought with him to dinner, a little toy poodle called Chuon Chuon (for dragonfly), and we all had to sit her on our laps and pet her, and she put up with it with a big smile on her face. SO FLUFFY. If I ever got a dog, I'd like a Chuon Chuon myself, except my stupid ethical policy of adopt-don't-shop, get-animals-indigenous-to-your-environment etc means I'll never get a Chuon Chuon, so I might as well content myself with cats. (Think of the Instagram photos of my own Chuon Chuon curled up with the cats. GOLD. MINE.) 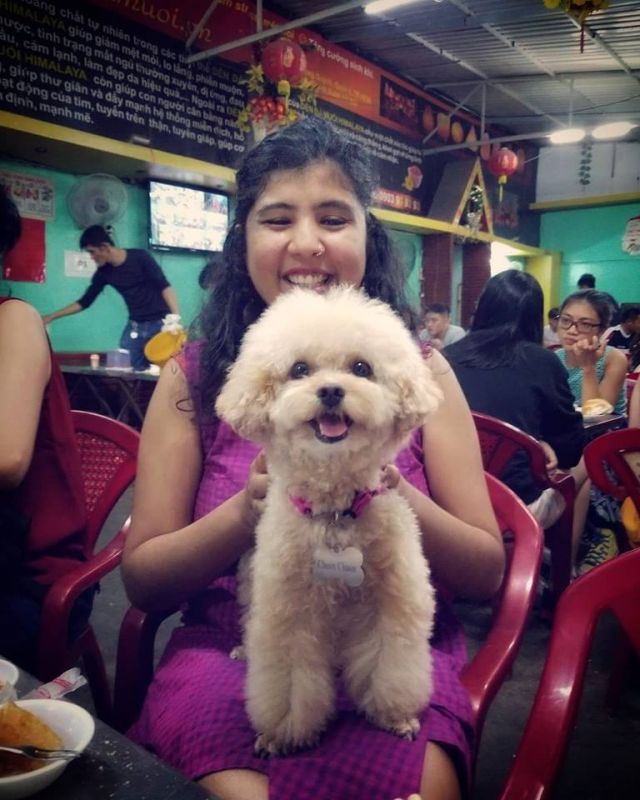 On the night bus to Nha Trang

We decided to skip the Mekong delta, because it looked sort of lame. No offence to anyone who's been and thinks it was amazing, by the way. We just looked at a few of the suggested itineraries for that area and it was all, “stop at coconut candy factory” and so on, and I don't really want to see a coconut candy factory. It seemed very much like one of those bus tours to Agra where they stop off at a “marble factory” which also has a shop and you have to go in, even if you don't want to.

Instead we did a night bus up to Nha Trang. A couple of things: there's this open bus pas in Vietnam which is a good deal, but ONLY IF you know your itinerary well in advance. If you don't, it's not worth the price, because you have to tell the driver/agent your stops at least 48 hours in advance, so don't bother getting the pass even if the agent tells you it's cheaper, it's not going to make your travel any more flexible.

We booked online ourselves, and got a nice luxurious sleeper bus. I say “nice and luxurious” which it was for little old 5'2” me. For 6'3” K it was like if you or I had to spend the night on our old school desks. With padding, of course, but still, about that size and width. I stayed up most of the night reading anyway, and between his height and my reading problem, by the time we got to Nha Trang, we were both equally shattered at 6 am, and the hotel didn't let us check in till 8. (We paid for an early check-in, otherwise we would have had to wait till 2 pm, standard check-in time across Vietnam, and they're not usually cool about you reaching early.)

Our plan was to literally stay in Nha Trang overnight and leave the next day, but since we spent most of the first day asleep, we stayed for an extra day, just to rest a bit. We thought maybe we'd go snorkelling or something, but it was raining, and there were red flags all over the beaches, and another couple we met at a BBQ restaurant told us that the snorkelling was terrible, jellyfish all over the place.

Nha Trang on the whole was pretty disappointing. We rented a scooter and checked out most of the town, even driving far out of it, to some remote villages, but for the most part it was very very touristy, and those tourists were mostly Russians. So much so that the signs in the restaurants were also in Russian. So, like Morjim, basically.

HOWEVER. I did have one of the best meals of my whole trip in Nha Trang, at a restaurant called Lac Canh. It's a DIY barbecue place (not the same one where we met the couple, that was American BBQ), where they bring you a little grill and marinated meat and you cook it yourself. (They have vegetarian options too.) So good, we ordered two lots of meat. 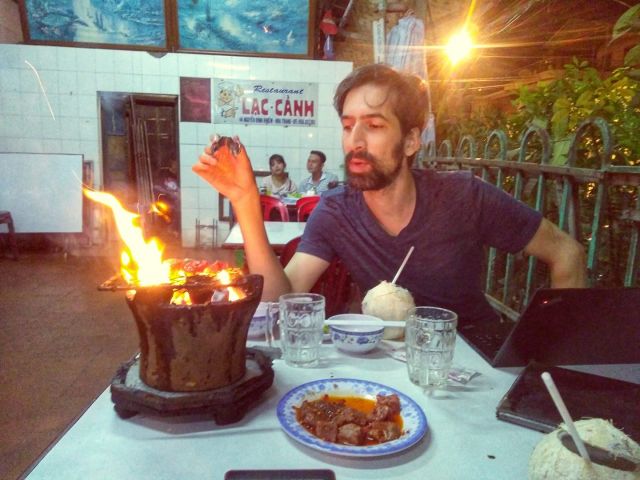 Onward to Hoi An!

We took a plane from Nha Trang to Hoi An, being the second-cheapest and most convenient way to travel there. We didn't have any other stops to make in the South, so it was up to the more communist North for us.

I had heard so much about Hoi An, how charming it was, and how we'd definitely want to stay more than two days, that we decided to book only one night at the hotel so we'd be able to move around. (This was not my idea, in fact, it stressed me out a little bit, but it turned out to be a good idea as you shall soon see.)

The first night we were staying at the Hoi An Villa, which was sweet, but I had neglected to check the fine print in the Booking.com details, and it turned out that for the room (which was not very cheap either, mind you) there was only a shared bathroom. Guys. There is a limit to how backpacker-y I can be. That limit is a shared bathroom. I couldn't. I just could not. Instantly, I fired up that Booking app, and I found us a nice semi-luxurious hotel which was just slightly more expensive than this shared bathroom situation, and had a pool and a large buffet breakfast and everything, and that is where my middle aged bones were happy. (Acacia Resort or something. Very nice, would recommend.)

And next time, I'll tell you all about Hoi An, including our drive up through the Hai Van pass to Hue!