Newsletter: Finished another book and other tales from a writer's life

(Again, putting up old newsletters here. This one's from October 15, but if you want up-to-date stuff, subscribe! If you'd like to see whatever else I've published on the blog, look for the "newsletter" tag under this post.)

The biggest "Winter Is Coming" this week is that we have finally turned off all our ACs. Even at night, maybe especially at night. With the window open and the fan on full, we even need the duvet we normally use with the air con. I love this time of the year in Delhi, except for the smog and pollution and pre-Diwali, post-Dusshera smoke. But if you stay in a lot, you're good. Like we are. K has been insisting on us using the metro more, and so we've done some long commutes and some short ones underground. The problem with the metro is that to get to one, you need to sit in an auto, which means exposure to the elements, but once you're on, you have the smugness that comes with taking public transport. Which reminds me of our Puzzle of the Week: You have to get off at Metro Station D and you're getting on at Metro Station A. Do you say you have three stops to your destination or two? I say two, K says three, and we've been having long and loud arguments about this with no common consensus. (Comment with your thoughts!) (Tomorrow is also our five year anniversary, which means we've been arguing about things like this for five years! Yay us!)

Major News of The Week: I have finished the draft of my SIXTH book, which is the first part of a YA series I'm doing on the Mahabharata, a text that has always inspired me. (So much preferred to the Ramayana which is kinda... boring.) My editor called me with NO NOTES, reminding me of a recent New Girl episode where one of the characters tells the other he has no notes for his new novel, leaving the writer in despair, because he has no idea how to continue. Unlike him, I am very pleased with my lack of notes, because I'm doing another big (non-book-related) project, which is also full steam ahead like these things often are.

A deer there was, a deer, a deer: I became very into Nature with a capital N while I was in Goa, and by "into" I mean, I gazed at things and wished I knew more about them. Well, this week, running a random errand, K was like, "Um, what animal is that?" and I looked up across the crowded road and saw... a young nilgai, just chilling on the divider, eating dusty leaves, completely oblivious to the world around him (and all the cars stopping to take photos.) I called Wildlife SOS as one does, who told me that if they tried to catch the deer he'd probably hurt himself and people around him, so to leave him alone and he'd go home eventually. "He keeps doing that," the man on the other end of the phone said wearily. It was like a lovely surprise from the universe. And in lesser wildlife, I took a Butterflies of India book from my mother to take back to Goa with me when we return in December, and have been having fun identifying common species on our terrace. Today, a common tit (hehe) and the other day, a common wanderer. Common, but beautiful. (I want to live like common butterflies, I want to do what common butterflies do.) 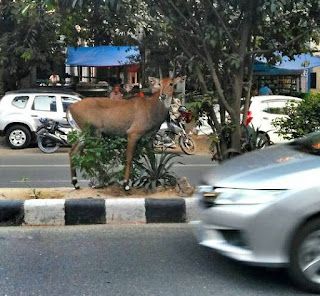 Song of the week: In celebration of the great Dylan winning the Nobel, here's a fantastic cover of It Ain't Me, Babe by Ke$ha. Yes, wake up in the morning feeling like P Diddy Ke$ha.

This week in stuff I wrote: As Aunty Feminist, on consent and who gets to decide the rules. ** In my relationship column talking about how important it is for couples to discuss finances. **

App of the week: The Merriam-Webster dictionary app. Was looking for a good phone dictionary and this one had the highest reviews, but also? It has super fun word games built in, which are super fun only if you're a word geek, but chances are if you're reading this, you fall into that category. Download here for iOS, here for Android.


Reading list: Blossom's, my favourite used books store, has just opened up a second location, which is great news in these e-commerce times. (That being said, if Blossom's went online with their catalogue, I would be SO HAPPY.) ** Why I'm voting for Trump: inside the average Trump supporter's mind. ** Facebook shut down a bunch of accounts belonging to Kashmiri youth. ** On the rap scene in India and classism. ** Not quite Black Mirror, a man spends 11 hours trying to get his WiFi kettle to boil. ** My favourite essay in a while, on writers, ambition, and the writing life. ** Shweta Bachchan Nanda is all, "Please leave my kid alone" and at first you're a bit eye-roll-y, but then you're like, "You have a point, Shweta." Good insights on being a famous kid and the mum of a famous kid.

Email ThisBlogThis!Share to TwitterShare to FacebookShare to Pinterest
Filed under Newsletter, On Writing, Urban jungle