Reposting from my newsletter, so this vacation is actually last year's vacation.


I've been on vacation, and you've been very patient about not demanding news from me, or is it just me that feels like I've missed an appointment by not writing to you? Either way, I've been on a Grand Odyssey around South East Asia, and am currently in our Bangkok hotel, where I remain till tomorrow night when we fly back to Delhi at an antisocial time, which was about 2000 rups cheaper than the regular flight and joke's on us, because we will pay about that much to engage our hotel for the day tomorrow, not wanting to be on the streets till midnight.

The Bangkok hotel is called Tim Mansion on the sign, but the wifi is Tim House, so you wonder when they upgraded. It's not a “mansion,” well, I suppose it's a large building with many rooms, but there's no silver tea service or a butler to hand you warm damp towels after a day of sightseeing, so I guess it's Tim House after all. My stories are many and varied, so I'm going to cut this up into two or three parts (lucky you, right?) and send them to you over the course of a few days, sooo if hearing about travel stories is not really your thing, feel free to ignore them and regular Delhi-based programming will return after these instalments.

Oddly when we got into Bangkok and unpacked, there was a strange driver's license tucked into K's bag—it's a backpack so easy enough to open while on the baggage conveyor, I guess—and it belonged to some dude from Canada, but Pakistani origin. I know this because I looked him up on Facebook, and while his name XYZ is pretty common, turned out that plus the Canada province he was from made him only one of two people. One of whom was posting excitedly about his trip to Hanoi and Bangkok. So I messaged the guy, but he turned out to be, well, not the sharpest tool in the shed, so despite my providing instructions and directions to the hotel, he kept saying, “I don't know” and calling me “dear” and “Meena” and I was almost glad he lost his license, because if there's one thing worse than being called “Meena” by someone I do not know (IT IS NOT THAT HARD TO TYPE OUT MEENAKSHI) it is being called “dear.” At that last “dear” I gave up trying to give him more instructions, and now he has left the city and the mystery of how his license got into our bags will never be solved.

But I'm going backwards. Let's return to three weeks ago. 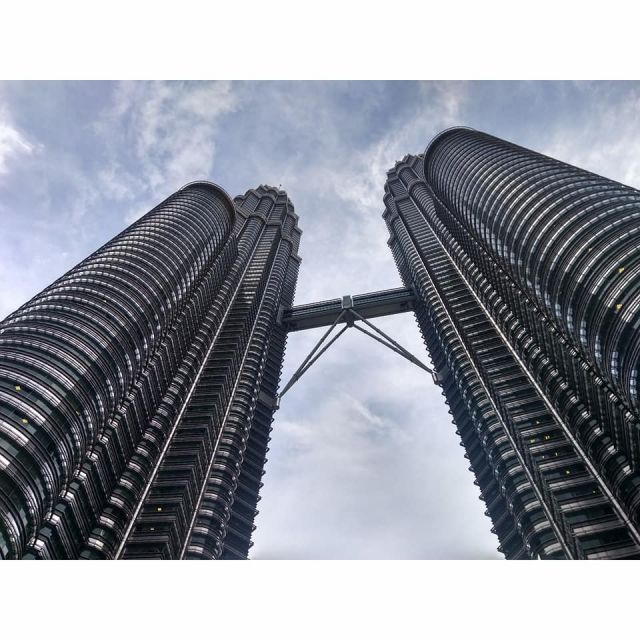 There are no direct flights from Delhi to Vietnam yet. I believe one is starting soon, but until then, you have to stop over in Kuala Lumpur (to get to Ho Chi Minh City, or Saigon as I'm going to call it from now on, since I am also a person who says “Bombay” instead of “Mumbai”) or Bangkok to get to Hanoi. We'd never been to Malaysia either, so we decided to extend our stopover to two days so we could look around KL a bit, get a feel for the city, etc. Plus I have a cousin there who offered to put us up for a few nights, so everything worked out perfectly.

There's a certain joy in hanging out with your cousins as an adult. I'm sure people with siblings feel this way about them too, but with cousins, you sort of drop in and out of their lives—you stay in touch for a bit during college, ingrained with years of hanging out every summer, but then, eventually you sort of scatter, like seeds in a pod. Depending on how you are related, you will see each other at family gatherings, and make an effort to get together if you're in the same city. But, you know, life happens. On my mum's side, though, I've managed to stay relatively close to all my sibs-once-removed, we have a Whatsapp group and everything. (On my dad's side is my one-and-only female cousin, and that is a treat in itself.) Anyway, my KL cousin was the perfect host, and told us lots about the city and turned out to have the same approach to tourism as we did: it's best experienced through putting things into your mouth, so we ate everything.

KL is an interesting city. It's much more expensive than I imagined, like fancy Delhi prices for eating and shopping, but the food is varied and plentiful. I stayed away from biryani etc, though my cousin told me that the Indian food in Malaysia is not quite like Indian food in India and should be experienced at least once, but I rejected it in favour of Chinese and traditional Malay curries, which are kinda amazing. Picture me as a sort of Pac Man just opening my mouth and having food drop in, and you'll picture what I did over the last three weeks.

Of course, I went to the Petronas towers and took a photo of it from right underneath (check). Of course, we also went to the electronic mall and bought K a new laptop battery, and me an SD card. (Check.) I also went hoping to get a cheap deal on a phone I've been eyeing, but alas, the prices were pretty much the same.

Actually, this reminds me of the First Day Abroad disaster. As some of you know, we got married last year (that's not the disaster), and for our wedding, we got some money in dollars as well (still not the disaster). The plan was to use these dollars whilst a-travel, because the rupee keeps crashing, better rates etc etc, BUT someone (me) very helpfully put all the dollars into different pouches in her locked drawer, for safekeeping? Or something? When we had our home invasion last year, the burglars had unearthed one of the dollar pouches I had (what? Don't you all have little baggies with a little foreign currency in it?) and left it on the floor (maybe they thought it was play money?) and so that was added to my stash, plus another envelope with more money, basically, long story short: instead of putting all the money together, I put it in separate locations and only carried one of the pouches with me, the Burglar one, so we had a lot less money than we thought we were going to have. (There's your disaster.) Also I thought I had somehow dropped the money between home and the airport, and that was freaking me out so much, I sat down at KL airport and wept. Anyhow, budget-schmudget, I finally said, let's just have a good time.

(Now that I am back in Delhi, I can tell you that the dollars are safe and sound, and very unhelpfully, still in my locked drawer.) 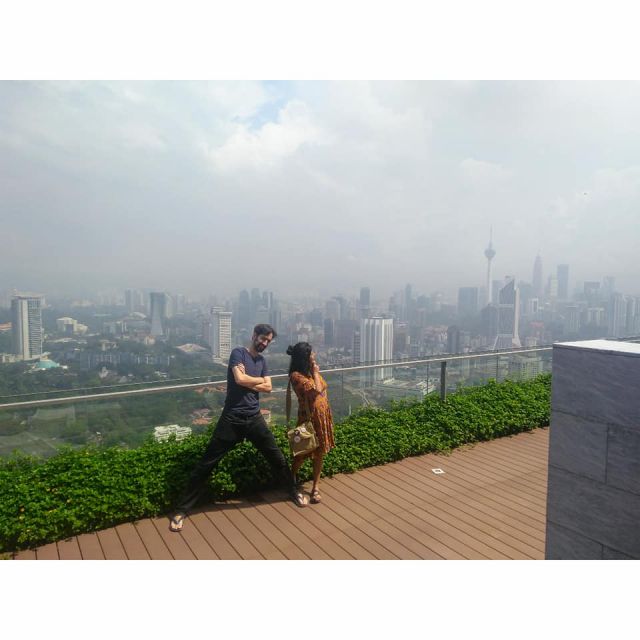 The only research I have done for Vietnam is:

2) Let K show me the first half of Apocalypse Now. (That movie is LONG.)

3) Watched the This Is Us Vietnam episode.

5) Eaten a few meals at Little Saigon in Hauz Khas market, which I am pleased to report is pretty authentic.

Anyhow, so apart from those last two things, my Vietnam is mostly an American construct, war and poverty and guns and all that, and war is not a super interesting subject, says the child of peace times in her own country. Unfortunately, it is for everyone else, so it was hard to get an idea of the country that didn't involve the Great American War Lens of the '60s just like, hanging over it.

That Great American War Lens shattered as soon as we stepped out of the airport. Hordes of screaming teenage girls were waiting for a K Pop boyband, and since they were bored, they cheered for all of us, each time we passed the automatic doors. Finally, in a bustle of pink and glitter, the K Pop band emerged and walked swiftly past the fans, the screams rose to an almost chant, and I got a video of it for my Instagram stories, but we were in Saigon proper now.

We stayed at The Tripwriter Hotel, chosen primarily because of the hotel sign, The Tripwriter spelled out in typewriter letters. Apart from that, it was a modest little hotel, small rooms, but clean, very close to everything, and a free breakfast in the morning, so can recommend if you're looking. The sign was hidden behind some ivy though, so even though we were dropped off right next to it, we spent another hour, walking with our backpacks through the heat and past the zillions of scooter drivers who are everywhere, even on the sidewalks, looking for the place, until we looped back and found it.

(There are 4 million people in Saigon, and 2 million drive scooters. This is a true fact that a guide told us.) 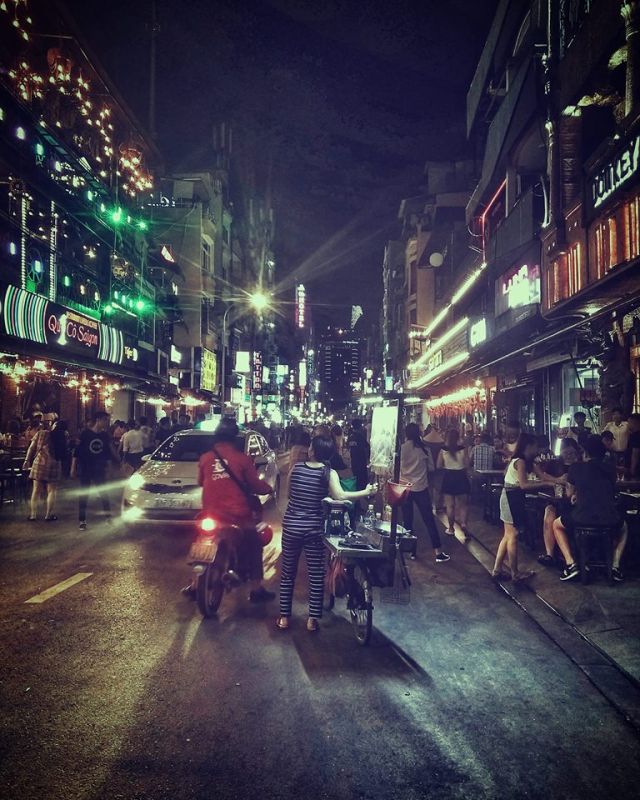 Everything in Saigon happens in District One. It is the Connaught Place of districts, if Connaught Place was somehow also Hauz Khas Village and Humayun's Tomb. We were staying in the Pahargunj-y bit, and every night, there were rows of bars, all competing with each other's sound systems, all with white tourists, mostly young, sitting in clumps at the entrance, looking somehow startled. Like, “Am I really in Saigon or just at my local with my friends?” Or maybe I misinterpreted their expressions. Maybe they were thinking, “Look at us here, now, so young, so unstoppable.” As you walked your way to the end of the Long Road With The Bars, you started seeing more local faces. Young Vietnamese also came to this part of town to party, and they also parked themselves at the entrance, watching the world go by, chattering at the tops of their voices. No murmurs for the Vietnamese, by the way. They are a country that like to communicate at the tops of the their voices, whether it's two in the afternoon or midnight on a night bus when everyone's trying to sleep or six am, right outside your hotel room. Even just passing a friend on the street.


I, on the other hand, am far more tolerant about people talking really loudly when I can't understand what they're saying. It's still annoying, but it's just regular annoying, not annoying in the middle of my brain, where I am woken up by my own head conveying to me what people are saying, you know?