Four days into thirty six, and I am filled with good resolutions. None of your humdrum ones either, no, these are little lifestyle changes that, if done properly, should reclaim all the parts of me that are scattered everywhere. The first one is to not check my phone the first thing when I wake up. It's harder than it sounds, so I've taken to putting my phone on charge in the dining room, which means I have to leave the coziness of bed to get it. It means that my mornings belong to me again, the outside world does not interfere until I allow it to, and I wake up slowly, eyelids fluttering, echoes of sleep still everywhere. I lie in bed then, sometimes I think about my dreams: when you look at a phone as soon as you get up, you don't remember your dreams anymore. Sometimes I talk to K, sometimes I think about the day ahead and what I'd like to do. It's become sort of precious, this just-this-house-just-this-bed time. Of course, since social media is a hard habit to break, I felt a bit fidgety this morning, but my brain learned to deal with the fidgets, it produced a train of thought for me to go down, a cat appeared to walk across my chest and meow for her breakfast. If you think of waking up each day as a rebirth, then every morning is the day you are born, you do a little accounting with yourself: how do I feel today? Are all my limbs intact? I feel in a better mood than I have on several mornings, I feel bright and alive.

The other thing I have done, and maybe I shouldn't mention it until it takes is started a reading journal. A "Book of Books" which is an idea I got from this article, earlier this year, but never thought to take up. However, starting to diarise again, no matter how small and specific, has been good for me. Because while the pages of my notebook are filling up with what I'm reading, and what I'd like to read, and books on my to-be-read pile and so on, there's also insights into my state of mind, which I wouldn't have thought of had I not been writing all my bookish thoughts down. Pamela Paul, the author of that article, felt the same way, she loved opening her "Bob" to see how her tastes had changed, how one genre influenced another and so on. I have gotten out of the habit of hand writing anything, but slowly--and with the help of a beautiful pen--I'm hoping to reclaim it.

This week in books and reading: The book that inspired me to begin this in the first place was Jonathan Strange And Mr Norrell by Susanna Clark, a book it felt like the whole world had read except for me. I came home from Goa and found a copy waiting for me, part of Bloomsbury's new editions of some of their more popular books. In many ways, the cover of my copy is what drew me in, it was so beautiful, this mysterious woman done in shades of flame orange and burnt sienna, the satisfying heft of it, even the font, never say that new editions are a waste of time, because they can draw in the most unlikely of readers. Having tried to read this book several times in the past, especially when it first came out and everyone was reading it, and having abandoned it, I only picked it up because I wanted something fat and solid and maybe a little fantastic. To my joy, I realised it was the book that Jane Austen would write if she wrote books about magicians. I loved it, despite, or perhaps because of the fusty language, the "shewed" for "showed," the "surprize", the descriptions of history laced with magic, the hundred footnotes at the bottom of the pages. It's been so long since a book has felt like serendipity, look, here I was all along, and here you are, come to discover me. I think that's a sort of falling in love as well, of all the libraries in all the world, and here you are, in mine.

Now I've finished it, however, and my own Bob is teeming with ideas about what I should read next, and since a friend kindly gave me an Amazon gift voucher for my birthday, I bought four books off that and am reading one right now: Still Life by Louise Penny (that I am currently reading) (the first in a series of detective novels about a Canadian inspector called Gamache, and I have heard nothing but good things.) (I don't normally buy crime novels, but it's a genre I enjoy SO MUCH that I'm just going to own to it, guilt-free). I also bought Deep South by Paul Theroux (review), The Penguin Book Of The British Short Story: From PG Wodehouse to Zadie Smith (review) and The Parasites by Daphne du Maurier (review.)

This week in parties: My own birthday party last week was excellent, and here is a photo of me and K dressed as Mario and Princess Peach respectively. 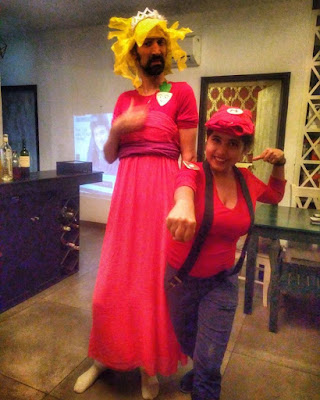 Our cook made a feast, and everyone drank and ate and talked, and it was all very civilised.

And because it's December in Delhi, literally my favourite time of the year, everyone's so social! And in such a good mood! We have become very Adult about our socialising and have created a shared Google calendar, just so you know we're that couple now. I'm not sure what use it is, because I keep diligently marking down all the parties we've been invited to, and K, just as diligently, asks me "what do we have on Wednesday?" But hey! At least the CONCEPT is grown up.

This week in food and drink: Kofuku for my birthday dinner with just the two of us. Lovely. Perhaps the best Japanese food I've had and the sushi was soooo good. And it's in the weird dystopian Ansal Plaza which makes it even more exciting.

Town Hall with my friend Nayantara, where because of MCD something or the other, they've stopped their terrace seating, which is too bad, because it was a very pretty terrace, however, we sat downstairs, she gave me a gorgeous box of Ruskin Bond inspired hand painted stationary and we drank copious amounts of wine.

Then Indian Accent, the new one at the Lodi, with my friend Shrayana, and we drank MORE wine and ate: panko crusted chillis stuffed with goat cheese, baked fish, bacon kulchas, mushroom kulchas, daulat ki chaat and a surprise birthday cake! Mmmm.

Then my friend Samit's birthday party last night, where he served up this insane haleem and nihari from some place called Purani Dilli? Sadly, I was too full from all the fried fish he waved in front of us for starters to do much justice to the meal, but out of greed, I tasted everything.

It's been a good week.

This week in stuff I wrote: A response to the Cat Person short story in the New Yorker for Scroll. ** I've also started to put a lot more of my archives on my blog, so please look at it also.

It’s true that the bulk of these seventeen—seventeen!—stories sound like Tom Hanks movies. Or rather, they are stories that could have been written by an alien whose only exposure to the planet earth is through Tom Hanks movies … This book-shaped object made of cardboard and paper was never going to be a book exactly. It is a gift, something that parents give to their college-bound children as revenge for making themselves difficult to understand … in four hundred pages, there’s hardly even a hint of conflict or a suggestion that American life is anything less than a holiday where everyone rides Schwinn bikes, leaves the immigration office to go bowling, and has a dog named Biscuit.


- Lit Hub's most savage reviews of the year.


And that’s where memory—whether direct, or received from elders or pop culture—can be most subjective. As bad as the present may seem, the people who actually lived in those “simpler times” had less education, less health care, less equality, and less ability for economic and social advancement than today. It’s a little like the fallacy of past-life regression: no one ever thinks they were once a lowly peasant, or died of disease at birth. But we couldn’t have all been princes or kings. Now is still the greatest time to be alive, in other words, for the vast majority of humankind.


-Quartz has a great series on the nostalgia economy

You’re exceptionally hairy. A shock of bristly setae covers your body and face to help you keep warm, collect pollen, and even detect movement. Your straw-like tongue stretches far beyond the end of your jaw, but has no taste buds on it. Instead, you “taste” with other, specialized hairs, called sensillae, that you use to sense the chemicals that brush against particular parts of your body.


Jen: But the prime minister is the second-worst plot in a movie with 855 plots (number approximate). Can someone tell me what the meeting when PM Grant and President Billy Bob Thornton was *actually* about? Anyone? Anyone at all?
Tanya: It was about creating more tension between Hugh and Natalie. She was "his" in his mind because he had a crush on her and her chocolate biscuits and tea.
Jen: Which is *ridiculous.* Would the prime minister of Great Britain really take a stand against ... whatever he was discussing with the president ... just to declare his secret love for an aide? Please say the answer to this is no, please say the answer to this is no ...
Tanya: Well, um ... huh? I think someone's calling me.

- Tis the season to rewatch Love, Actually and have arguments about it


- What happens when a bot rewrites Harry Potter? HILARITY, THAT'S WHAT.


At my Delhi school one day, a seven-year-old in my class found out that my middle initial “A” stood for “Abdul.” He declared it was something to be ashamed about—rather viciously for his young age and in the unrelenting manner that children do when they pounce on an embarrassing secret. I realised at that early age that my Muslim surname was unlikely to ever be an asset and was best kept to oneself when it could be helped.

- On being Muslim in India


Engraving can make anything—even the most humble of junk store finds—feel a little more precious. Adding a personal message quickly and easily transforms a tchotchke into something meaningful. For instance, last year I found a WWII-era brass compass for my fiancé. I polished it up, took it to my local jewelry store, and had them etch in a phrase that—I swear to god—came to me in a dream.

- I love this DIY gift guide by Atlas Obscura most of all the gift guides.

Email ThisBlogThis!Share to TwitterShare to FacebookShare to Pinterest
Filed under Being me, Books and reading, Dipso chronicles, Newsletter, People I love